Brain CT scan - a method of brain imaging, intracranial spaces, as well as bones and soft tissues. The technique of brain CT scan base on mathematical modeling of the internal structure of the brain and surrounding structures on the results of his X-ray beam irradiation.

By using of the brain CT scan can be visualized by the following structures with their image in different planes: 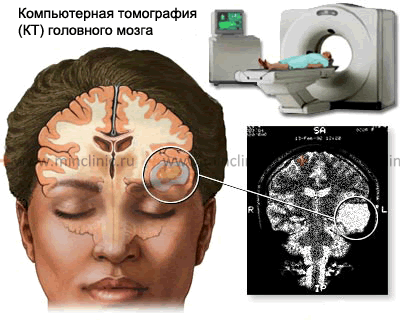 Brain CT scan allows to visualize some types of the brain parenchyma and its membranes tumor.

In what cases is carried out brain CT scan examinations:

Soft tissue injuries of the head during brain CT scan are characterized by local thickening them with mild focal increase in the density. This is a sign of blood impregnating of bruised tissue. If slice scan coincides with the lumen of the wound cavity wound of the head or intersects at an angle the wound channel, it is possible to specify the depth of soft tissue damage, determine their blood imbibition and to establish a projection ratio with skull fractures. Subgaleal hematomas easily distinguished from the heads soft tissues injuries and subcutaneous accumulations of cerebrospinal fluid or pus. 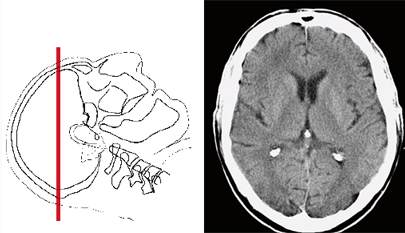 Acute subdural hematomas on the brain CT scan are characterized by double-convex, less plano-convex area elevated plane, adjacent to the cranial vault. At the same time is probably the formation of atypical forms of epidural hematoma: 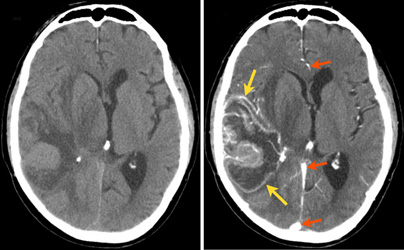 Depending on the severity of destructive changes, signs of cerebral edema, as well as the amount of extravasated blood, on the brain CT scan there are 4 type of injury lesions.

Diffuse axonal injury (DAI) is characterized by a general increase in brain volume due to swelling (congestion), or generalized edema, and often small focal hemorrhages in the corpus callosum, stem and periventricular structures.

During the initial deformation suprasellar cistern (due to displacement hippocampal or direct gyri) in its cavity revealed additional protrusion. During a rough deformation of this cistern due to the caudal dislocation and / or displacement of one or both gyrus of the hippocampus in its cavity defined by only a few fragments cistern.

The role of the brain computed tomography (CT) in the diagnosis of acute traumatic brain injury (TBI) is extremely high. It is significant during consequences of craniocerebral injury. Depending on the nature and severity of the changes in the brain tissue, intrathecal space and ventricular system, post-traumatic focal and diffuse changes detected by the brain CT scan, divided into 3 degrees: mild, moderate, severe.

Cerebral arachnoiditis on the brain CT scan appears uneven expansion of subarachnoid fissures, forming different shapes and sizes of cystic cavities or fuzzy rendering them in some areas. There the expansion, deformation or absence of the cranial base cisterns. In chiasmal areas can be detected isolated and communicating with the cerebrospinal fluid spaces cystic cavity.

Subarachnoid cysts are characterized by well-defined zone of low density. Most of these cysts are located in the lateral fissure, at least on the surface convexital hemispheres, and even in the posterior fossa. In most cases, the cysts have a funnel shape with a vertex facing towards the brain. Usually the cyst wall formed by atrophied cortex, white matter of the brain and its membranes.

Chronic subdural hematomas visible like a sickle modified density zones adjacent to the surface of the cerebral hemispheres. There are four types of hematomas: a reduced, equal with the brain, increased and mixed density. The length of the hematoma varies from 5 to 20 cm. Sometimes during the brain computed tomography (CT) visualized the outer and inner layer of the hematoma capsule.

Post-traumatic hydrocephalus is characterized by a spherical expansion of the ventricular system, especially the anterior horns, often with periventricular edema. At the same time convexital subarachnoid spaces are not visualized.

Posttraumatic stroke is characterized by a zone of low density, which, in contrast to local edema, a more precise borders and formed into autonomous areas of vascularization pools of blood supply of compressed cerebral vessels.

During pneumocephalus on the brain CT scan revealed clearly defined areas of low density with a coefficient of absorption equal to air density.

Great importance of the brain CT scan has in the diagnosis of post-traumatic inflammatory complications. In the area of encephalitis revealed heterogeneous areas of lowering density of edematous brain tissue. Encephalitis area gradually increased, may appear more areas of reduced density in the center and the periphery.

Often the focus of encephalitis bordered strip of moderate increase density. At this stage it corresponds perifocal zone of hyperemia. Later, at her side during the formation of an abscess appeared contours of his membrane. At the beginning the shell slightly visible, it is not closed, visualized only by intravenous administration of contrast material. The most demonstrative abscess in the stage of formed capsule. During this period, it is characterized by a clearly defined area of increased density, which has an annular shape. The introduction of contrast agent uniformly enhancing the density of the capsule, contributes a good visualization of the abscess in the area surrounding edematous substances.

Subdural empyema characterized by sickle area of reduced density. With intravenous administration of contrast agent noted increased density the edge of squeezed hemisphere, which outer contour emphasizes the inner edge of the empyema. Sometimes pus can have the same density of the brain.

Brain CT scan can produce a number of thin sections, perform a three-dimensional reconstruction of the study area of the brain, identify the vasculature (angiography) and even individual nerve trunks and blood vessels after injection of a special contrasting drug. This reconstruction provides invaluable assistance to the neurosurgeon in planning the operation and for subsequent post-operative monitoring.