To occurrence of acute frontal sinusitis is contribute acute rhinitis, swelling of nasal mucosa (especially the middle part) as a result of influenza, acute respiratory disease, narrow and deviated frontal-nasal canal, the facial skeleton injuries, long-term stay of foreign bodies in the nose. 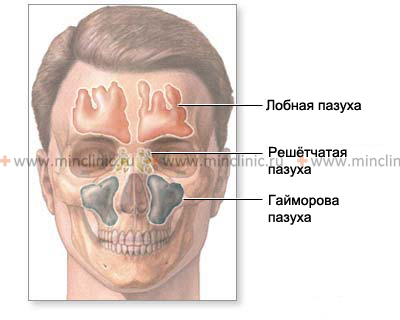 Acute frontal sinusitis (frontal sinus inflammation) accompanied by headache in the forehead and behind the eyes, increase in body temperature.

Chronic frontal sinusitis is often the result of acute sinusitis. Permanent signs of chronic frontal sinusitis are headache, nasal discharge, hypo- or anosmia. Serous or purulent inflammation of the frontal sinus is characterized by the accumulation of serous or purulent, respectively, in the sinus contents. Vasomotor form of allergic inflammation of the frontal sinuses characterized by paroxysmal headache in the forehead, sneezing, profuse watery discharge from the nose, impaired nasal breathing and smelling, watery eyes, a feeling of tickling in the nose. Sometimes frontal sinus inflammation can occur rapidly, spread to the periosteum and bone, give rise to a subperiosteal abscess, orbital and intracranial complications.

In frontal sinusitis is important to get better emptying of the frontal sinus contents and resorption of the inflammatory process. For this used anemisation of nasal mucosa, especially of the middle nasal passage, where is the natural opening of the sinuses. For this purpose, use drugs with vascular constriction action. Prescribed 0.05% solution of naphtizine (2-4 drops in the nose 3-4 times a day). Due to the fact that the drug increases blood pressure and dilates the pupil, it is contraindicated in juvenile hypertension and tachycardia. Sanorin applied as a solution or emulsion (2-4 drops in the nose 3-4 times a day). A similar effect has galazolin, naphazoline, rynofut. Sometimes prescribed 1-2% solution of collargol, or protargol (2 to 4 nose drops 3 to 4 times a day). For quick effect used intranasal solution of epinephrine (1:1000; 1-2 drops 2-3 times a day).

In the nasal cavity enter the cotton napkin moistened with the listed drugs. Cotton napkins, protruding from the nose in children fixed with a piece of cotton wool, to prevent their aspiration. In severe temperature reactions, use of antibiotics (tetracycline, vitacycline, oletetrin or penicillin intramuscularly) at a dose appropriate to age. Sometimes the antibiotics in combination with sulfanilamide drugs (sulfadimezin, norsulfazol or etazol), also used drugs with prolonged action (sulfadimetoxin). To reduce the headache prescribed ibuprophen, amidopyrine. Apply calcium gluconate.

It should be remembered that vasoconstrictor drugs (sanorin, naphazoline) with long-term use promotes the development of persistent atony of the nasal mucosa, its swelling and even the emergence of sensitization and edematous polyps. Therefore, after 6-7 days of vasoconstrictor use take a break or change the drug.

To treat an attack of allergic sinusitis use measures of the overall impact: hot foot bath (6 liters of hot water add 1 tablespoon of dry mustard), mustard on the calf for the reflectory reduction of hyperemia and edema of the nasal mucosa. Do intranasal novocaine blockade (1 ml of 0.5-1% novocaine solution in the thickness of the mucosa in the region of the front ends of the lower or middle turbinates). Sometimes prescribe sedatives: 5 ml of Belladonna tincture with 10 ml of Valerian (up to 10 drops 3 times a day). With profuse watery secretions from the nose using 0.1% aqueous solution of atropine (up to 6 drops 2 times a day inside). In allergic case prescribed hyposensitization therapy and antihistamines. In the childs life threating event (accompanying with laryngeal edema, severe allergic reaction) is used intravenous administration of prednisolone (up to 1-3 ml for 3 min). If allergic frontal sinusitis accompanies with asthma or asthmatic bronchitis, during the attack intravenously slowly injected 10 ml of aminophylline or diaphyllin 2.4% solution.

For acute and chronic frontal sinusitis apply the local thermal procedures (hot compress, Solux on the forehead and nose — 8-10 procedures). Assign also the UHF (10-12 procedures), which penetrate deeper than other physical agents that affect sympathetic and parasympathetic innervation of the vascular walls and promote a more vigorous absorption of substances, resulting in inflammation. Also used intranasally blue light therapy — 8-10 procedures. Combination of UHF and blue light therapy (8-10 procedures) is more effective. In allergic form of frontal sinusitis is effective intranasal electrophoresis with 5-10% solution of calcium chloride or 1% solution of diphenhydramine (8-12 procedures).

Before frontal sinus probing in frontal sinusitis is important to choose a probe, pre-defining the curvature of the probe between the front end of the middle turbinate and the nose side wall. The probe is directed upward anteriorly and slightly outward. In the confusion, looking for the hole closer to the frontal sinus anteriorly, under the front end of the middle turbinate. If zoning is not possible, it is advisable to perform trepanation of ethmoid sinus anterior cells and resection of the hamate bone in case of its excessive development. Probing of the frontal sinus in children is not always possible, but it is possible without any complications.

In unsuccessful conservative treatment of frontal sinusitis with diagnostic and treatment purpose is performe frontal sinuses trepanopuncture by a special instrument for the extraction of their contents. Anterior and the orbital wall is more accessible and less dangerous for its implementation. Frontal sinus extranasal trepanopuncture through the orbital and through the anterior wall is performing at any age. Used a variety of devices, mechanical drills, electrotrepans, dental burs, trocars, needles. Penetration of the frontal sinus cavity by drill bit or needle is determined by the subjective feeling of "falling" or emptiness.

Trephination of the frontal sinus carries the risk of injury to her back wall and tool penetration intracranialy into the brain. To avoid this danger, helps a special device for the frontal sinus trepanopuncture. It is equipped with special automatic tripping device that instantly stops the drilling at the end of the passing drill the anterior bony wall of the frontal sinus. At the same time, both audible and visual signals confirming the completion of drilling.

The method of trepanopuncture with device. Examines radiographs of the paranasal sinuses in 2 planes (frontal and lateral). Patient in supine position. Under local anesthesia (1 % solution of novocaine) puncture soft tissue and periosteum on the anterior wall of the frontal sinus by cannula tip all the way into the bone, while the drill is immersed in the tip. The drill bit extends from the probe to the length, pre-calculated on lateral projection radiographs. In formed channel (by a puncture with cannula tip) in the soft tissues administered drill. With pressure on the bone special automatic device runs a motor, turns off sound and light signals, and starts bone drilling. After the drilling the frontal sinus bone wall axial load on drill tip is reduced and special automatic device instantly switches off the electric motor, includes electroforms to absorb the inertia of the drill as well as sound and light signals, confirming that the drill bit has passed the front wall of the frontal sinus. Formed channel is control by the probe and into created hole insert the cannula with the tube for further studies of the sinuses and treatment of the patient.

Prior to the initial opening of the frontal sinus pre-conduct x-ray examination of the sinuses in 2 projections, paranasal sinuses computed tomography and determine their size, condition of the brain walls, etc. After anesthesia, the frontal sinus is opened over the lacrimal fossa, produce audit and, if the sinus intact, close it by sewing up the wound. Upon detection of pathology perform a wider operation to remove pathological content of the sinuses and restoring connection with the nasal cavity. An incision is performed on the corresponding eyebrow and side of nose to edge of the pear-shaped hole. Then peeled the soft tissue subperiosteal reveal the frontal sinus via the supraorbital region. After removal of pathological content of the sinuses, anterior cells of the ethmoid sinus is opened, forming as broad fronto-nasal canal.

Before skin stitches, in formed anastomosis among frontal sinus and nasal cavity is introduce a drainage tube of PTFE or heterogeneous peritoneum, such tubes are less traumatic than rubber. Sometimes during this surgery, leaving bone and subperiosteal bridge in the region of the eyebrows at the orbital rim, and above it (from the forehead) and below (from the eye) penetrate into the sinus formed through 2 holes. The bridge serves as a support for the soft tissues and protects them from collapse. Endo- and extranasal approaches can be combined. Endonasal introduce the probe into the frontal sinus, then in the frontal process of the maxilla from the inside outwards making a hole ("window") to the subcutaneous external access to the frontal sinus, resected her bony wall, and remove the anterior cells of the ethmoid sinus, forming the communication between the frontal sinus and the nasal cavity. In some cases, instead of a hole ("window") resected frontal process that creates broad access to the sinus.

Sometimes in orbital complications do conventional cut on the brow, and the opening of the frontal sinus producing through the orbital wall, starting from the medial side. In the future, the intervention is carried out according to the standard technique.

Endonasal approach into the frontal sinus in children with acute and chronic frontal sinusitis without the usage of surgical optics is not successful, because in this case the operation is performed almost blindly and technically difficult even in adults. Before the intervention is appropriate under the microscope pre-enter the probe into the frontal sinus (for control), then remove the anterior cells of the ethmoid sinuses, creating a large communication between the frontal sinus and the nasal cavity. Anastomosis expand under control of an operating microscope. After surgery, it is administered up of heterogeneous peritoneum, PTFE or rubber tube. Postoperative sinus is washed, antibiotics and other drugs can be applied directly. The tube is removed from the fistula not earlier than 3 weeks.