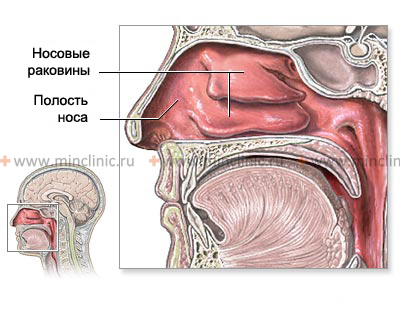 Mucous membrane of the nasal cavity swells in chronic form of catarrhal rhinitis. 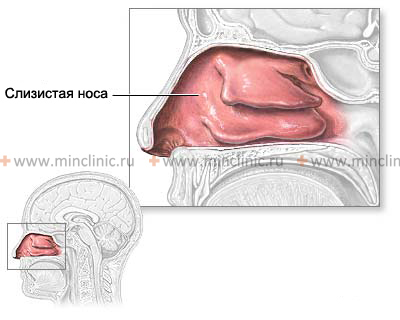 Chronic catarrhal rhinitis causes degeneration and reduction of the ciliated epithelium, exudation, swelling of the mucous membrane of the nasal cavity and vasodilatation.

The focus in chronic catarrhal rhinitis treatment concentrate on finding and eliminating the etiological factors of the disease, and the prevention of possible complications. Prescribe astringents: 2-3% solution of Protargolum, Collargolum (nasal drops), for older children — peach oil (10 ml) with menthol (0.12 ml) in the form of nose drops.

In the prevention of chronic catarrhal rhinitis is a significant role for physical training and sports.

Chronic hypertrophic rhinitis is characterized by an increase in nasal turbinates (mostly lower). Nasal mucosa, and sometimes the bone is thickened, narrowing the lumen of the nasal passages, breathing through the nose difficult or substantially absent. Chronic hypertrophic rhinitis can occur in cavernous or vascular, fibrous, papillomatous (papillary), bone and combined forms. In cavernous form of chronic hypertrophic rhinitis breathing through the nose usually deteriorates due to changes in weather conditions, as well as the position of the child's head and body. Turbinates size are reduced after lubrication with 0.1% adrenaline solution. In contrast, in fibrous form reductions of the turbinates after lubrication almost never happens. 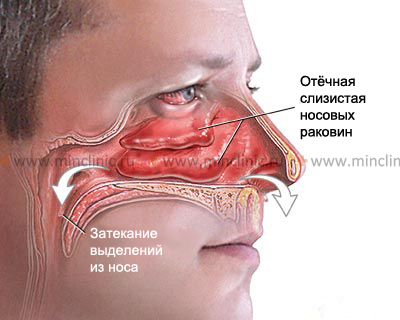 Papillomatous form of chronic hypertrophic rhinitis is rare and is characterized by the fact that the front ends of turbinate resemble in appearance raspberries. There is a persistent respiratory failure.

Often, the hypertrophy is limited (only in the region of the ends of the turbinates, on the nasal septum). Sometimes hypertrophy in the nasal septum confused with pronounced Jacobson's organ. Patients with chronic hypertrophic rhinitis usually breathe through the mouth. They often marked headache, sleep disorder, lethargy, disturbance of smell.

Morphological changes during chronic hypertrophic rhinitis are characterized by pronounced proliferation, increasing the number and size of epithelial cells and mucus glands, increased number of fibroblast, proliferation of the connective tissue.

Chronic hypertrophic rhinitis treatment requires more radical measures. These include the cauterization by chemical substances (trichloroacetic acid, silver nitrate, chromic acid, etc.), electroacoustic, surgical diathermy, and gentle turbinotomy. As the result of cauterization there is necrosis with subsequent scarring of the tissue and reduction of the turbinates, however, violated the integrity of the nasal cavity mucous membrane, ciliated epithelium is destroyed. Therefore, in the treatment of chronic hypertrophic rhinitis advisable to use gentle ways, devoid of the abovementioned disadvantages, in particular the submucosal electracoustic.

An indication for submucosal electroacoustique in the treatment of chronic hypertrophic rhinitis is a limited form of the soft tissues hypertrophy. Local anesthesia produce by 3–5% solution of cocaine with 0.1% solution of adrenaline (lubricate of the nasal cavity mucous membrane, mainly in the field of intervention) and 0.25–0.5% solution of procaine (injected into the interior turbinate parallel to the bone surface, i.e. in the course of the alleged introduction of cautery). We emphasize, that when applying anesthesia with 1% novocaine solution patients sometimes have adverse reactions (unconscious phenomena etc.). Thin needle-like cautery is introduced into the interior turbinate parallel to the bone surface in the course taken by the needle when injecting novocaine, or special needle, which greatly facilitates the introduction of the cautery. Then switch-on electric current and hot catheter is slowly withdrawn from the tissue.

Chronic hypertrophic rhinitis treatment in children with total turbinate hypertrophy produced by submucosa turbinotomy. Local anesthesia with lidocaine supplemented by 2-3 ml of 0.25-0.5% of novocaine solution (injection ahead of the site of attachment of the turbinate, and in the front and middle parts of the turbinate with the medial and lateral sides). Then by the crescent-shaped scalpel conducting arcuate incision to the bone along the front edge of the turbinate, peeled the mucosa and periosteum from the bone and resected the bone, after which the mucous membrane swab is fixed to the lateral wall of the nose.

Under unfavorable anatomical correlation between the nasal turbinate and nasal septum (the narrow nasal passages, etc.) sometimes extend the incision posteriorly, which greatly facilitates the operation of the posterior turbinate resection. Submucosal interventions and after them usually there is no bleeding, which apparently, can explain the gentle nature of the intervention. In addition, in the anterior turbinates, no large blood vessels, resulting in these areas most accessible to stop the bleeding under direct vision.

Reactive phenomenon after surgery is usually mild, postoperative scar is small (respectively incision site in the anterior pary of the turbinate). Postoperatively the treatment of chronic hypertrophic rhinitis, usually adhesions (synechia) in the nasal cavity are not formed. Almost entirely preserved mucosa with ciliated epithelium and all physiological functions, the configuration of the nasal cavity and optimal physiological conditions in the nose.

The technique of submucosal resection of the middle turbinate hypertrophy is a little different from described above. The indication for surgery is not only due to hypertrophy of the bone core, but also other forms of hypertrophy of the turbinates (limited, etc). Therefore, in some cases, remove not only bone, but also other tissue, while preserving intact the mucous membrane of the upper part of the middle turbinate (i.e., the olfactory region).

Operations on the nasal turbinates are different and depend not only on the shape and extent of hypertrophy, but also on the ratio of the turbinates with the septum, nasal bottom, etc. So, with hypertrophy of the anterior end of the inferior turbinate tissue is excised in the form of a wedge. In the case of total hypertrophy (soft tissues and bone) with a pair of scissors cut off the excess tissues and remove part of the turbinate osseous basic, soft tissue edges pull together, holding their by swabs. Inferior turbinate advisable to shift laterally — sometimes enough to improve nasal breathing and sense of smell.

Methods of submucosal cryotherapy on the lower and middle turbinate with chronic hypertrophic rhinitis. Local anesthesia produce by 5% cocaine or 2% lidocain solution (lubricated nasal mucosa mainly in the field of intervention) and 0.25-0.5% novocaine solution, injected in the anterior turbinate parallel to the bone surface, i.e. in the course of the alleged introduction of the cryoprobe. After anesthesia special thin cryoprobe injected at the desired depth in the thickness of the turbinate under the mucous membrane parallel to the bone surface along the way, made with a needle and a special extender. Then it slowly removed from tissue.

Recently, for cryotherapy use different instruments. In addition to submucosa, produce a superficial exposure. Methods of superficial exposure is somewhat reminiscent of the classical method of electrocautery. To exclude the cold effect on the tissue of the nasal septum, and other nearby tissues in the medial portion of the put on cryoprobe in a special guard of PTFE or introduced into the nose by funnel tube. Local areas of hypertrophy tissue in the nasal cavity frozen conventional and submucosal way. Swabs are not administered in the nose.

Soon after the operation developed moderate swelling of soft tissues of the turbinate, more pronounced after superficial cryotherapy. On the next day in a place of cryotherapy formed whitish-gray color necrotic plaque, which one day becomes denser and gets dirty gray color. On the 5-th day after operation the scab spontaneously separates, revealing a smooth shiny surface of turbinate. Submucosa cryotherapy is permissible only in turbinates with mucosal hypertrophy. Cryotherapy does not apply in osseus form of hypertrophy, in these cases it is more expedient to carry out the submucosal conchotomy or displacement of the turbinates.

In hypertrophy of the rear ends of the turbinates is used submucosal cryosurgery, since in this kind of intervention the surgeon controls the location of the end of a cryoprobe in the thickness of the turbinate and the risk of a cold effect in the region of the pharyngeal opening of the auditory tube is excluded. After cryosurgery turbinate reduced, leading to improvement of nasal breathing, sense of smell, reduction of nasal discharge. Recommend breathing exercises, physical exercises.

Chronic atrophic rhinitis in children is less common than in adults. It occurs as a result of thermal effects (in areas with warm climates), mechanical (trauma, surgery of the nose) factors. Not excluded, and a genetic predisposition to the disease. Atrophy and subatrophy of the nasal mucosa occur at any age.

In chronic atrophic rhinitisе marked dryness in nose and itching. Rhinoscopy can detect the dryness of the mucous membrane, crusting, wide nasal passages (due to atrophy of tissue). Morphological changes are characterized by mucosal atrophy with a decrease in the number of mucous glands and hypoplasia. The ciliated epithelium is replaced by areas of stratified squamous. The movement of the cilia of the ciliated epithelium slows or stops.

For the treatment used alkaline solutions in the form of drops, spray, irrigation with sodium bicarbonate solution, lubrication of the nasal cavity with iodine-glycerine (Lugol's solution) with gentle massage of the mucous membrane of the nasal cavity, that enhances the function of the mucous glands. Previously used 1.2% and 5% yellow white mercury ointment (10 g of ointment + 1 g Shostakovskiy balm), nitrofurazone ointment (1:5000), alkaline and oil inhalation, 2% solution of potassium iodide into the solution (1/2 teaspoon 2 times a day), aloe Vera extract, up to 30 injections. It is necessary to humidify the air in the room.

In combination of hypertrophic process with atrophic treatment is carried out in view of the predominance of a particular process, working on some areas of hypertrophy with one methods, and atrophy — with other methods.