Viral infection often causes corresponding changes not only in the nose, but also in the paranasal sinuses. In infants, the flu often begins with a loss of body weight. The temperature sometimes remains subfebrile. In children aged 1 to 4 years, the temperature response is more pronounced than in children under 1 year old. On the mucous membrane of the nose, hemorrhages are often seen. Acute respiratory disease usually occurs with less severe toxic effects than influenza. Rhinitis is characterized by abundant serous, mucous, mucopurulent, purulent, sometimes bloody discharge. Possible acute otitis media (especially in infants).

Treatment of influenza is carried out in conjunction with an infectious disease doctor. Assign bed rest, rational nutrition, rich in vitamins (especially A and C). In infants, before feeding, gently cleanse the nose to facilitate breathing when sucking. Influenza vaccine is recommended. The rest of the treatment is the same as with a banal acute rhinitis. 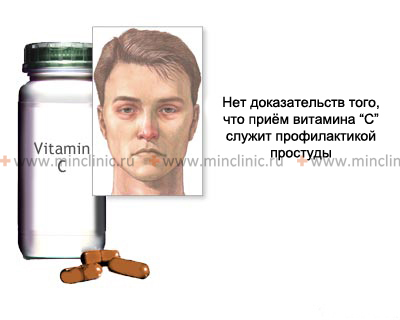 There is a widespread misconception that vitamin C prevents the flu or a cold.

Diphtheria currently does not have such a value as before. The disease is characterized by the presence of films in the nasal cavity, bloody discharge, lymph node reaction, intoxication with impaired general condition of the child.

The diagnosis of diphtheria is based on data of anamnesis, general otorhinolaryngological and bacteriological studies. In recent years, there were original forms of diphtheria, difficult for diagnosis, when the signs of the disease are poorly expressed. There is a so-called fibrinous runny nose of non-diphtheria origin, adenovirus diseases with predominant localization in the nasal cavity.

Treatment of diphtheria is carried out in the infectious disease department and consists in the introduction of parenteral antidiphtheria serum (anatoxin), the prescription of antibiotics. There is a general restorative treatment. Alkaline inhalations (1-2% solution of soda) are expedient for the rejection of films. Locally, a 2% solution of boric acid with adrenaline is used to purify the nasal cavity from the films and excess mucus. It is important to provide infants with expressed breast milk.

In the prevention of diphtheria, isolation of a sick child, repeated studies on the germ-carriers of other persons, and protective vaccinations for other children are necessary. 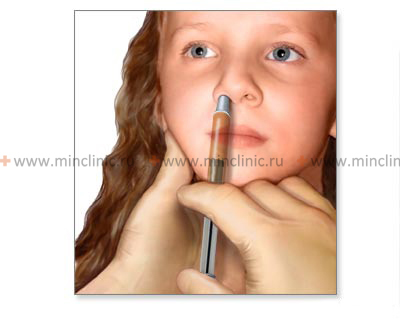 Locally to cleanse the nasal cavity from the films and excess mucus in diphtheria apply 2% solution of boric acid with adrenaline.

2-3 days before the onset of rash on the skin inflammatory processes in the nasal cavity (prodromal symptom of measles) are noted. Rhinitis with measles accompanies the underlying disease to blanching the rash. Sometimes the inflammation extends to the sinuses. Discharge may be with an admixture of blood. The disease is often accompanied by laryngitis, tracheitis, conjunctivitis, acute otitis media.

The measles are characterized by a typical anamnesis, as well as general clinical and otorhinolaryngological data, the appearance of blue spots on the mucous membrane of the cheeks (Velsky-Filatov symptom), and skin rash.

Measles treatment is basically the same as in rhinitis of common etiology. 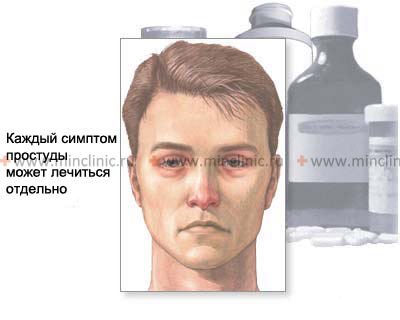 Measles treatment is mainly symptomatic as the common cold or viral rhinitis.

No specific specific changes in the mucous membrane of the nasal cavity were observed in scarlet fever. Changes in this disease are similar to those seen with banal rhinitis. The diagnosis of scarlet fever usually does not present difficulties, especially in the presence of rash, specific tonsillitis, toxemia and discharge from the nose.

Scarlet fever treatment is carried out in the infectious department. Assign a massive dose of antibiotics, rinsing the mouth and throat by 3% boric acid solution, polyvalent anti-streptococcal serum.