Sphenoiditis (inflammation of the sphenoid sinus) is usually combined with ethmoiditis (a posterior group of ethmoid sinus cells), less often with frontal sinusitis and sinusitis, so the symptoms of the disease are mostly similar to those described above. Headache with sphenoiditis is often non-localized, felt in the back of the head, orbit, crown, temples. Discharge flows down the throat.

The diagnosis of sphenoiditis is based on:

Treatment of sphenoiditis is most often conservative. However, with complicated pansinusitis, orbital and intracranial symptoms of sphenoiditis, they resort to surgical intervention.

Punctures of the sphenoid sinus with sphenoiditis are performed after accurately determining the angle of needle insertion to drain the contents of this inflamed paranasal sinus.

To diagnose sphenoiditis, the sphenoid sinus is probed. With a wide olfactory gap, it is carried out under the control of vision or an operating microscope. Under unfavorable anatomical conditions, it is necessary to thoroughly anesthesia and anemise the olfactory area, move the middle nasal concha with the Killian's nasal speculum (if it interferes with seeing the natural openings at the very roof of the nose), and probe the sinuses by touch. Probing is carried out with a probe slightly curved at the end or a cannula probe with a length of at least 10 cm (the distance from the entrance to the nose to the front wall of the sinus in older children and adults is about 8 cm and from the posterior edge of the nasal septum about 3 cm).

The sounding technique for sphenoiditis is as follows. A self-retaining nasal dilator is used. With the patient's head tilted back, the end of the probe is placed on the lower edge of the entrance to the nose, led along the nasal septum (without deviating from it laterally), in the middle of the lower edge of the middle nasal concha and fall into the natural opening of the sinus; the corresponding sensation arises. The sphenoid sinus can be flushed with a graduated cannula or a thin ear catheter no more than 2 mm in diameter. With a small diameter of the natural openings of the sinus (about 1 mm), the probe does not penetrate it. If it is carried out closer to the front of the middle of the lower edge of the middle turbinate, it can get into the sieve plate and pass into the cranial cavity. It is safe to go behind the indicated landmark. Failures may be since the sphenoid sinus is of very different shapes, with additional septa, ridges, it may be in the form of a rudiment or completely absent. 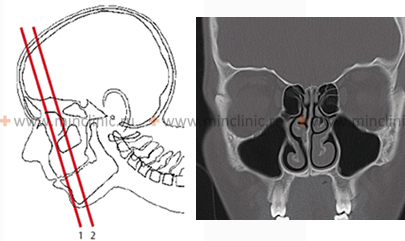 Computed tomography (CT) of the paranasal sinuses in the frontal plane.

The original method of puncture of the sphenoid sinus with sphenoiditis by accurately determining the angle, which is calculated using a sighting device, is not used in children. It has limited application, as it is technically difficult and not always feasible.

The sphenoid sinus with sphenoiditis can be opened endo- or extranasally under local or general anesthesia. After probing, to improve the outflow of contents from the sinus, its opening can be widened with a sharp spoon with an elongated handle, which is manipulated from top to bottom, outward and inward.

The essence of the operation is to create conditions for drainage by removing the anterior wall of the sinus, which is facilitated by an atrophic process in the nasal cavity when the natural opening of the sinus is visible.

In some cases of sphenoiditis, all posterior ethmoid cells are opened, after having previously (if necessary) resected the middle turbinate, the curved nasal septum, and removed the polyps. Then a hook or probe, a sharp elongated spoon is inserted into the natural opening of the sinus, or the anterior wall of the sinus is resected using special chisels (cutters). Sometimes, with sphenoiditis, not only the anterior but also part of the lower wall is removed or the sinus is opened using elongated burs. 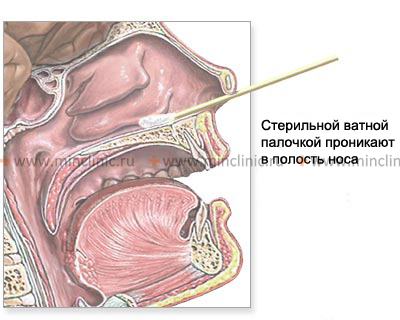 In order to diagnose sphenoiditis, the sphenoid sinus is probed.

It is advisable to combine the complex treatment of purulent sinusitis with local ozone therapy in the form of washing the inflamed sinuses with a physiological solution containing ozone at a concentration of 6-8 mg / l (to evacuate purulent discharge from the sinuses), and subsequent saturation of the mucous membrane with ozone by aerating the sinuses for 15-20 min ozone-oxygen gas mixture (ozone concentration 6-8 mg / l). The use of local ozone therapy is especially indicated for hypersensitivity to antibiotics and antiseptics. As inflammation and pus discharge decrease, it is recommended to reduce the ozone concentration to 3-4 mg / l to stimulate tissue regeneration.

Local ozone therapy must be supplemented with the introduction of a suspension of hydrocortisone into the affected sinuses to relieve swelling of the sinus mucosa and the area of the anastomosis. Also, parenteral ozone therapy by intravenous administration of a physiological solution with an ozone content of 0.8-1 mg / l (400 ml every other day, for a course of treatment from 3 to 6 infusions) is indicated for patients with severe symptoms of intoxication. The duration of parenteral ozone therapy is determined by the general condition of the patient and the disappearance of signs of intoxication. Taking into account the relative instability of ozone in physiological solution, it is advisable to transfuse the latter by drip.