Pituitary adenoma and hyperprolactinemia syndrome — is a symptom, that develops in women and men due to prolonged increased secretion of the anterior pituitary hormone prolactin and characterized by pathological galactorrhea (milk expiry), menstrual irregularities (amenorrhea) in women, and impotence, oligospermia, gynecomastia, and (rarely) galactorrhea in men.

In patients with hyperprolactinemia, magnetic resonance imaging may identify unchanged areas microadenomas of the pituitary gland.

Microadenoma of the pituitary gland can be identified in patients diagnosed with hyperprolactinemia syndrome, acromegaly or during diagnosing of a patient with Cushing's syndrome. Not secreting hormones microadenoma in 90% of cases is a non-functioning pituitary adenoma (NFPAs), although there may be other types of cysts, vascular, neoplastic, hyperplastic or inflammatory processes that clinically will not manifest.

Most tumors of the pituitary gland are unstable. Some of them to be part of a genetic syndrome such as multiple endocrine neoplasia type 1 (MEN1), McQune-Albright syndrome or Carney complex. Clinical analysis of cells (cytology) shows that in their origin they are all monoclonal mutations of the same cell.

From the hormones producing tumors, prolactinomas are the most common. Other tumors secreting hormones:

Most clinically non-functioning pituitary adenomas (NFPAs) in origin are gonadotropin and secrete alpha and beta fragments of the gonadotropin peptide.

Emphasizes the role of genetic mutations in the case when the observed patients of four Irish families who had a pituitary tumor had the same mutation as the patient of the 18th century with a tumor of the pituitary gland, suffering from gigantism.

Previously, when not identifying microadenoma in life, often observed an increase in the prolactin levels in the blood laboratory study. Now with the help of magnetic resonance imaging can identify pituitary microadenomas, which have not been suspected previously in the patient's study.

In the 3048 cases of autopsies conducted in the U.S. studies have shown in 316 cases (10%) the presence of one or more pituitary adenomas, their size was less than 3 mm. Immunological test for prolactin was positive in 40% of cases. International studies have also recorded similar results.

In another study comparing single-and be-portal approaches (through one or both nostrils) during transsphenoidal surgery of pituitary macroadenoma. It was revealed that the single- portal (through one nostril) allows perform the surgery faster, with minimal impact on healthy tissue, and such access is adequate for the resection (removal) of other types of pituitary adenomas.

Remove of adenomas with a dumbbell configuration during transsphenoidal surgery is technically difficult, and in such cases, extended endoscopic endonasal approach more indicated.

Pituitary macroadenoma is a benign epithelial neoplasm composed of adenohypophysial cells. Primary malignant tumors of the pituitary gland are quite rare. The development of pituitary adenomas consists of several stages and includes the irreversible stage of initiation, after which the growth of the tumor itself.

In this case, as in the case of pituitary microadenomas, assumes the leading role of a genetic mutation.

Some pituitary tumors can be a part of any clinical syndrome. In multiple endocrine neoplasia type 1 (MEN1), an autosomal dominant genetic disorder, pituitary adenomas (most often a prolactinomas) is observed in combination with the parathyroid glands tumor and pancreatic islet cells (of Langerhans) tumor.

McQune-Albright syndrome, skin lesions, multiple bone fibrous dysplasia found together with hyperfunctioning endocrinopathies. This syndrome is the result of activation of the alpha subunit of the Gs protein and activates tissues that respond to hormonal effects by adenylate cyclase. In McQune-Albright syndrome is the most common of the pituitary tumor is somatotropinoma, which accompanies acromegaly. A significant portion of the somatotropin in sporadic cases of acromegaly hides the same mutation.

Carney complex is an autosomal dominant disorder, which characterized by primary pigmented nodular lesions of the adrenal glands, spots on the skin (pigmented nevus), Sertoli cell tumors of the testes, acromegaly, melanocytic schwannomas, and cardiac myxomas.

Pituitary tumors found at autopsy in 25% of cases. Detection of pituitary neoplasms is from 1 to 7 during the year per 100,000 population (based on neurosurgical interventions).

Morbidity and mortality in pituitary macroadenomas

Morbidity in pituitary macroadenomas ranges from the revealed non-functioning pituitary adenomas (NFPAs) to clinically to disabling macroadenomas. Morbidity is the result of mass effect (bitemporal hemianopsia), hormonal imbalance (deficiency of pituitary hormones as a result of compression of normal pituitary cells, or excess of hormones produced by the tumor), and patient comorbidities. The increase in morbidity is also associated with the treatment of these tumors.

The results of the autopsies show no differences in the incidence of pituitary macroadenomas between men and women. The only exception is corticotropinomas , which is more common in women than in men (4:1). Among children pituitary macroadenoma detected more often in girls than in boys. This difference in incidence is not clear, but may be associated with the clinical picture in such patients. Amenorrhea (or irregular menstrual cycle), which is a relatively common symptom in women along with macroadenomas, reinforces the suspicion about the presence of pituitary disease. Pituitary macroadenoma occurs at any age, but its incidence increases with age and reaches a peak between the 3rd and 6th decades of life.

Nonfunctioning pituitary adenomas are benign (not malignant) growths of the pituitary gland tissue, located at the base of the brain. According to the results of the brain autopsies and imaging studies (MRI or CT scan), it was revealed that in every 6 cases can meet such type of pituitary adenoma.

The level of the hormone prolactin (lactotropin) in the serum:

There are many reasons for an abnormal increase in prolactin levels (hyperprolactinemia). If you did not reveal specific organic causes for the pituitary MRI or CT scans of the sella turcica (adenoma or microadenoma prolactinoma or pituitary gland can not be detected), we need to think about other possible causes for this disorder: 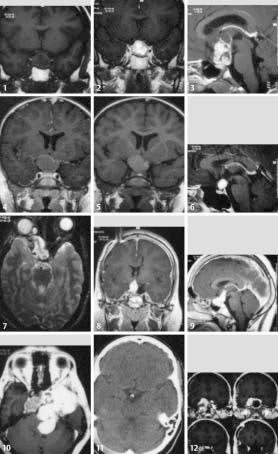 Localization of pituitary adenoma on the brain MRI.

The cause of hyperprolactinemia can also be:

The following therapeutic measures depending on the stage and the manifestations of the disease:

The proposed therapy is to appoint mild homeopathic regulators, respectively, due to hyperprolactinemia, conducting visceral osteopathic diagnosis and therapy. And if there is a connection with the experiences or stressful events are held on psychological adjustment.

Choosing of treatment method for a patient with a nonfunctioning pituitary adenoma the neurosurgeon must be guided by the following data: