Acute and chronic inflammation of the nasal cavity and paranasal sinuses can cause some orbital and intracranial complications, which often lead to loss of vision, and sometimes the death of the patient.

Orbit, except the outer wall, surrounded with thin bony walls of the paranasal sinuses. Thin as paper, plate, separating the ethmoidal labyrinth of the orbit, as well as the upper wall of the maxillary sinus, in many cases have congenital bone defects. 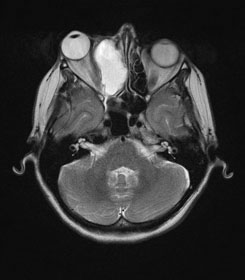 Mucocele in the eye sockets and nasal cavity is visualized on MRI.

Basal sinus, posterior ethmoidal labyrinth cells are often adjacent to the channel of the optic nerve. These cavities, and sometimes the frontal sinus, extending far posteriorly, can closely adjacent to the superior orbital slots through which the oculomotor, trochlear, abducens, and first and second branches of the trigeminal nerve. Call the bone wall may also have birth defects.

Orbit and eyes can suffer not only from the transition of inflammatory diseases but also from the mechanical pressure from the sinuses, the walls are bursting from the inside toward the orbit, displacing to a greater or lesser degree of the eyeball. Such bias eye diseases of the paranasal sinuses can be classified:

Acute sinusitis (inflammation of the frontal sinus ) is accompanied by a headache in the forehead and behind the eyes, fever.

The most common cause of rhinogenic complications in the orbit are diseases of the frontal sinus, among the latter, acute exacerbation of chronic frontal sinusitis.

In acute sinusitis, there is often a subperiosteal abscess, located at the top and the superomedial corner of the eye socket. In this case, often shifting the eyes are usually down, and severely restricting his mobility. Characterized by a sharp redness and swelling of the eyelids.

Orbital complications of sinusitis occur less frequently. A repeated acute sinus infection sometimes leads to the destruction of the upper wall of the maxillary sinus and the formation of a periosteal abscess, sometimes even phlegmon of the orbit. Often observed and a fistula in the lower orbital region.

Orbital complications of the disease anterior ethmoidal labyrinth cells occur more often, especially in young children. They should not be confused with the complications caused by osteitis and periostitis of the upper jaw.

On magnetic resonance imaging of the brain, an increase and enlargement of the right cavernous sinus and its lateral wall (arrow), which isointense on T1-weighted axial imaging.
On brain MRI with contrast (postgadolinium) during cavernous sinus thrombosis is visualized heterogeneous enhancement (arrow) on T1-weighted axial imaging. Observed exophthalmos of the right eyeball, eyelid edema and thickening of the oculomotor (extraocular) muscles.
Magnetic resonance imaging of the brain in the frontal (coronal) plane visualizes the cavernous sinus thrombosis. The visible region of multiple irregular filling defects at the site of the extension to the right cavernous sinus suggestive of thrombus.

Some features of different complications of the disease posterior ethmoidal labyrinth cells. Complications occur more frequently than in diseases of the anterior paranasal sinuses. There is infiltration into the depth of the orbit, and therefore their exophthalmos. When suppuration fiber is rarely seen sinking abscess, cellulitis often develops, which leads to cavernous sinus phlebitis and meningitis.

In lesions of the main sinus and posterior ethmoidal labyrinth cells are often observed functional disorders:

The diagnosis in early stages of the process is put based on external examination the patient rhinological examination and visual acuity and visual field changes. From hardware diagnostic ophthalmic complications of inflammation of the nasal cavity and paranasal sinuses are applied:

Local symptoms may be expressed differently depending on the nature, localization process and the degree of destruction.

Pain in the eye socket is intense at the beginning of acute inflammation and may increase the formation of the orbit phlegmon. If you break the skin cellulitis pain subsides. Note swelling and redness over the inflamed areas in the eyelids and conjunctiva. Often there are visual impairments, especially in lesions of posterior cells ethmoidal labyrinth and main sinus.

Magnetic resonance imaging (MRI) of the brain performed for suspected orbital complications of inflammation of the nasal cavity and paranasal sinuses.

To establish the relation between visual impairment and condition of the mucous membranes of the nose swab soaked with 2% lidocaine with adrenaline (1:1000), inserted into the middle nasal passage for 1-2 h. If after this vision does not improve, surgery on the paranasal sinuses is useless.

In acute inflammatory processes carried anemisation of the nasal cavity, prescribe antibiotics, sulfonamides and other means of general treatment.

Sometimes shows small surgical interventions, such as resection of the ethmoidal labyrinth or medium bowl. In the formation of subperiosteal periorbital abscess or to open it with a simultaneous operation on the affected sinus. In other ophthalmic complications, if conservative treatment was unsuccessful, resort to surgical intervention on the affected sinus.