Meningitis - bacterial or viral inflammation of the pia mater. Meningitis with otitis arises as a result of the spread of infection into the subarachnoid space of the cavities of the middle and inner ear or is a consequence of other intracranial complications (extra-, subdural brain abscess, sigmoid sinus thrombosis).

The most frequent causes of meningitis with otitis are cocci (strepto-, staphylo-, diplo- and pneumococci), far less - other microbes. But often in the cerebrospinal fluid can not identify any flora.

Most often, infection with otogenic meningitis spreads through contact or labirintogenous. The first time there are usually significant changes up to fracture in the bone separating the middle ear cavity from the meninges. It is sometimes leptomeningitis precedes inflammation of the dura mater (epidural or subdural abscess). When labirinthogenous meningitis infection from the affected labyrinth extends through the cochlea and vestibular aqueducts and internal auditory canal. This route of infection in meningitis is more common than in other intracranial complications.

In the initial stage of acute otitis media meningitis is most often a consequence of the hematogenous spread of infection (for vascular paths). This so-called fulminant form of meningitis, the most unfavorable. Pathological anatomy. The initial inflammatory changes pia mater (redness, swelling) also apply to the cerebral cortex. Serous exudate in the subarachnoid space during meningitis is later purulent. Simultaneously in the cerebral cortex in meningitis occasionally appear areas of softening and suppuration. Thus, each meningitis is essentially a meningoencephalitis.

The dura in meningitis also becomes hyperemic, tense. Inflammation of the membranes of meningitis often expressed in the base of the brain (basal meningitis), sometimes extends to the hemisphere of the brain or restricted to them. Even more rarely, meningitis is only observed in the cerebellum, sometimes extending to the shell and the spinal cord. In severe cases, purulent inflammation in meningitis is extended to all the subarachnoid space of the cerebrum, cerebellum and spinal cord. 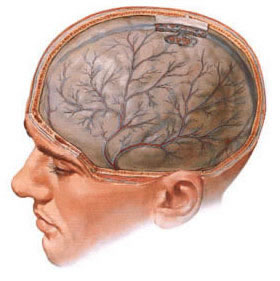 Meningitis - bacterial or viral inflammation of the pia mater.

The temperature of meningitis is increased to 39-40 ° C and above and has the "continua" character. Pulse is usually accelerated but sometimes marked bradycardia. The general condition of the patient with severe meningitis, a person is often pale, sallow, haggard, dry tongue.

Stiff neck and Kernig's signs and Brudzinski's signs always expressed in a patient with meningitis. Sometimes marked pyramidal signs (pathological reflexes - Babinski, Oppenheim, Gordon, and others). Occasionally there are spasms of the limbs. Often with basal meningitis observed abducent paralysis, and sometimes the oculomotor and other cranial nerves. Rarely occur with focal brain symptoms, forcing the resort to an unsuccessful and even unsound puncture the brain.

Cerebrospinal fluid (CSF) is published with the lumbar puncture is usually under significant pressure. It loses its transparency, becomes turbid, sometimes almost pure pus. CSF pleocytosis in CSF varies greatly from a moderate increase to the number of cells that can not be counted. Usually dominated by neutrophils, with a further favorable course marked lymphocytic reaction, but such a relation of cellular elements is not constant, especially when treatment with antibiotics. The protein content is usually increased, often significantly. The percentage of sugar and chlorides, on the contrary, reduced.

Lumbar puncture is carried out to measure the liquor pressure studies patency of subarachnoid space of the spinal cord, the definition of color, clarity, and composition of cerebrospinal fluid.

In blood - high leukocytosis, and a significant increase in ESR.

The use of antibiotics has led to significant changes in clinical meningitis. Symptoms become blurred, sometimes unexpressed, another character acquired during meningitis. So, there are cases of meningitis with subfebrile or normal temperature, with a mild headache, little marked meningeal signs, impaired consciousness, and other brain symptoms in general, satisfactory or even good condition. Often there are significant modifications in the cerebrospinal fluid (CSF pleocytosis reduction, changes in cellular composition in the direction of lymphocytosis, etc.) and hemogram also masks the true picture of the disease.

During meningitis with timely surgery, the absence of other complications, and rational use of antibiotics and sulfonamides mostly favorable, mostly disease after 3-4 weeks ends with recovery. However, there is a prolonged duration (up to several months), usually intermittent nature (the so-called recurrent meningitis). This form of meningitis caused by several factors

With intermittent flow with a number of outbreaks of meningitis and damping progressively increases resistance of bacteria. The prognosis for such a course of meningitis, mostly bad. Fatal properties also a hematogenous form of meningitis, in which the symptoms are often so lightning fast-growing that the autopsy can not establish a visible (macroscopic) changes in the shells.

In the presence of characteristic meningeal symptoms and a picture of cerebrospinal fluid, the diagnosis is simple. Having established meningitis, it is necessary to find out several circumstances - whether it is associated with ear disease, is it epidemic cerebrospinal or tuberculous meningitis, is it a consequence of another otogenic intracranial complication (for example, extradural or cerebral abscess).

Acute inflammation or exacerbation of chronic purulent inflammation of the middle ear speaks in favor of the otogenic nature of meningitis. The presence of meningococci or tuberculous mycobacteria in the cerebrospinal fluid reveals the nature of meningitis. However, mycobacteria are not always sown with tuberculosis. Tuberculous meningitis is characterized by a clear fluid, resulting from puncture under high pressure, lymphocytic reaction of the cerebrospinal fluid, prolapse of the fibrin film. The diagnosis is facilitated by the identification of organ tuberculosis. However, this is far from always possible, and at the same time, the clinical course of tuberculous meningitis can be atypical.

Along with tuberculous meningitis, otogenic meningitis should be differentiated from cerebrospinal meningitis. The latter is characterized by a sudden onset, the absence of any prodrome, which with otogenic meningitis can be in the form of a gradually increasing headache several days before the developed picture of the disease. If with purulent meningitis there is a picture of acute otitis media or exacerbation of chronic purulent otitis media, you should not hesitate with surgery on the ear.

In the vast majority of cases, operational findings confirm the correctness of the decision. During surgery, it is most often possible to detect other intracranial complications if meningitis has arisen on their soil. In the absence of such findings, careful monitoring of neurological symptoms and dynamics of cerebrospinal fluid changes is necessary, taking into account, first of all, the possibility of an unrecognized brain abscess. Suspicion of a brain abscess should arise in the absence of an improvement in neurological status, with a simultaneous tendency to normalize cerebrospinal fluid and protein-cell dissociation in cerebrospinal fluid (increased protein content with slight pleocytosis).

Operation on the temporal bone (simple or general cavity, depending on the nature of the otitis media) with wide exposure of the dura mater in the middle and posterior cranial fossa. If a concomitant complication is identified (epidural or subdural abscess, brain abscess, thrombophlebitis of the sigmoid sinus), an appropriate intervention is performed. Intervention in the maze or top of the pyramid, even with complications, is optional. Very often, the phenomena of purulent labyrinthitis or petrozitis are eliminated after a conventional operation on the temporal bone and drug treatment. However, if there is no success or incomplete effect, the indicated intervention on the maze or top of the pyramid should be performed.

Postoperative treatment consists of antibiotics and sulfonamides. Treatment should be combined with oral administration of nystatin to avoid the development of candidiasis (500,000 units 3-4 times a day) and vitamin therapy (ascorbic acid and a complex of B vitamins).

In especially severe forms of meningitis with a threatening increase in intracranial pressure that is not amenable to the indicated treatment, in addition to the operation performed, an opening of the lateral brain cistern is shown. In severe cases of meningoencephalitis, antibiotics are also administered through the lumen of the carotid arteries.