Hereditary hemorrhagic telangiectasia (HHT) is a genetic disorder that causes tangles in the blood vessels known as arteriovenous malformations (AVMs).

AVMs may form underneath the skin, where they are visible as red markings called telangiectases. They can also occur in the brain, spinal cord, and various organs throughout the body. AVMs may rupture, causing the blood vessels to bleed (hemorrhage) into the surrounding tissue.

Hereditary hemorrhagic telangiectasia is an autosomal dominant disorder, meaning that if one of your parents has HHT, you have a 50 percent chance of inheriting it. The disease affects more than 1.4 million people worldwide and is often misdiagnosed because of its various manifestations. AVMs may rupture, causing the blood vessels to bleed (hemorrhage) into the surrounding tissue.

Angioma (hemangioma) consists of a plexus vascular changes that form abnormal connections between the arterial and venous systems. In fact, we are talking about arteriovenous anastomosis or arteriovenous malformation (AVM), a developmental abnormality. For AVMs are characterized by the expansion and extension in time of vessels that make up this anastomosis between the artery and vein.

Dimensions of arteriovenous malformations range from small patches a few millimeters in diameter, located in the cortex or white matter of the brain, to the great mass of convoluted channels that form the arteriovenous shunt. This shunt between the cerebral artery and vein can be significant enough to increase cardiac output. Hypertrophied and expanded arterial "feeder" vessels in the brain reach the main affected areas are disappearing under the cerebral cortex and fall into the network of thin-walled blood vessels. Subsequently, the vascular network directly connected to the draining arteriovenous malformation veins of the brain. They often form a huge, extended, pulsating channels, delivering arterial blood.

Cerebral arteriovenous malformations (AVM) look like a tangle of vessels (arteries and veins), which is found in different parts of the brain and spinal cord.

Arteriovenous malformations can be found in all parts of the brain, brain stem and spinal cord, but the biggest of them more often found in the posterior halves of the hemispheres, usually in the form of wedge-shaped lesions extending from the cortex to the ventricular system.

AVMs are more common in men than in women (ratio 2:1), and may occur in families in one generation or several generations. Although this vascular anomaly is observed at birth, the complaints of patients often appear between the ages of 10-30 years, but sometimes after 50 years. 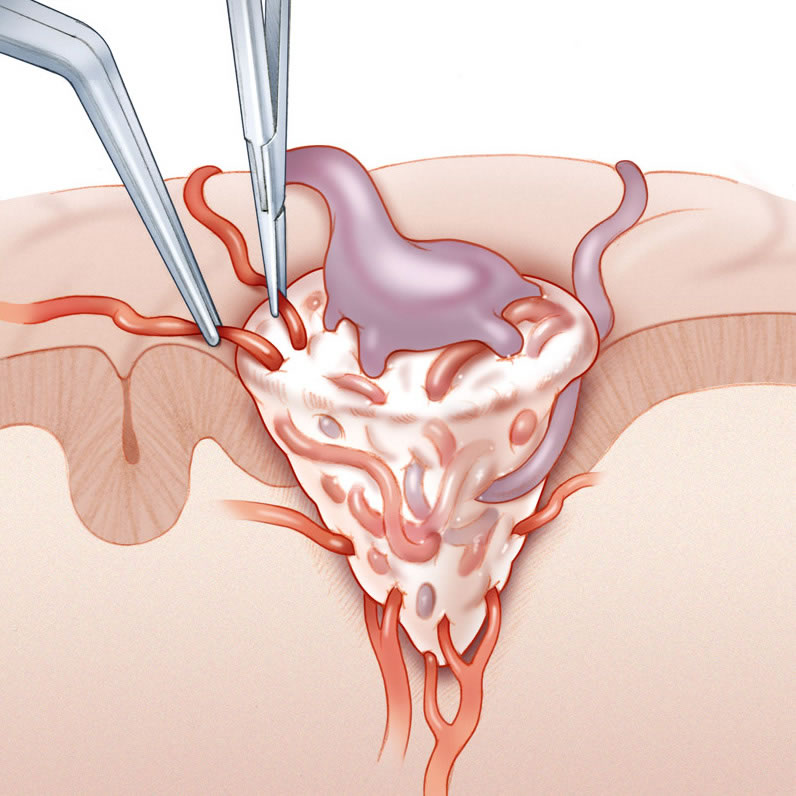 Cerebral arteriovenous malformations are the most common symptomatic vascular malformations. Possible presentations include:

The main clinical manifestations of AVMs in a patient are headache, seizures, symptoms of rupture of blood vessels and ischemia. Headaches can cover half of the cranium (hemicrania) and to be pulsating or diffuse. These headaches can mimic migraines. Sometimes the headache is combined with paralysis of the muscles of the arms and legs on one side (hemiplegia), and resembles hemiplegic migraine.

Just having focal seizures, which may be generalized. These seizures occur in approximately 30 % of patients with arteriovenous malformations, and usually well removed anticonvulsant medications (anticonvulsants).

In 50 % of patients with AVMs occur intracerebral hemorrhage. Most often it is intracerebral hemorrhage, but not podobolochechnym (subarachnoid). Leaking with blood usually does not accumulate in the basal cistern, and why symptomatic spasm of the arteries (cerebral vasospasm), located in the tanks of the brain, is rare in the patient.

Risk of re-rupture of arteriovenous malformation of the brain in the first 3 weeks (as is the case with aneurysms) is so low that there is no need to consider the application of reducing the chance of bleeding drugs (antifibrinolytic agents). Hemorrhage may be extensive and lead to sudden death of the patient. But if the size of the hematoma is small (up to 1 cm in diameter), then accompanied by mild focal hemorrhage symptoms, sometimes neurological deficits in a patient may not be at all.

In rare situations, AVM is so large that causes a redistribution of blood flow from the adjacent normal brain tissue ("steal"), leading to ischemia of this area adjacent to her brain. These phenomena are often observed steal at large arteriovenous malformations basins of the middle cerebral - posterior cerebral artery and middle cerebral - anterior cerebral artery, extending from the surface of the cerebral hemispheres of the cortex to the ventricular system.

With the involvement of vein of Galen in an AVM in a patient may develop hydrocephalus.

For large arteriovenous malformations basins of the internal carotid - the middle cerebral artery is often determined by systolic and diastolic murmur, listened to the doctor over the patient's eye socket in the forehead and neck, which can be felt reinforced jerky carotid pulse.

At the moment of rupture malformation cerebral arterial pressure is usually normal, what makes you think about the presence of AVM hemorrhage in a brain tumor or aneurysm rupture saccular. Headache in the early rupture of arteriovenous malformation is not as pronounced and common symptom, as when a ruptured saccular aneurysm of an artery in the brain. On the other hand, vomiting is common with any form of intracranial hemorrhage.

For visualization of an AVMs, its position and size are used magnetic resonance (MRI) and computed tomography of cerebral vessels (CT angiography) with contrast enhancement. This gives an opportunity to identify arteriovenous malformation channels to burst. 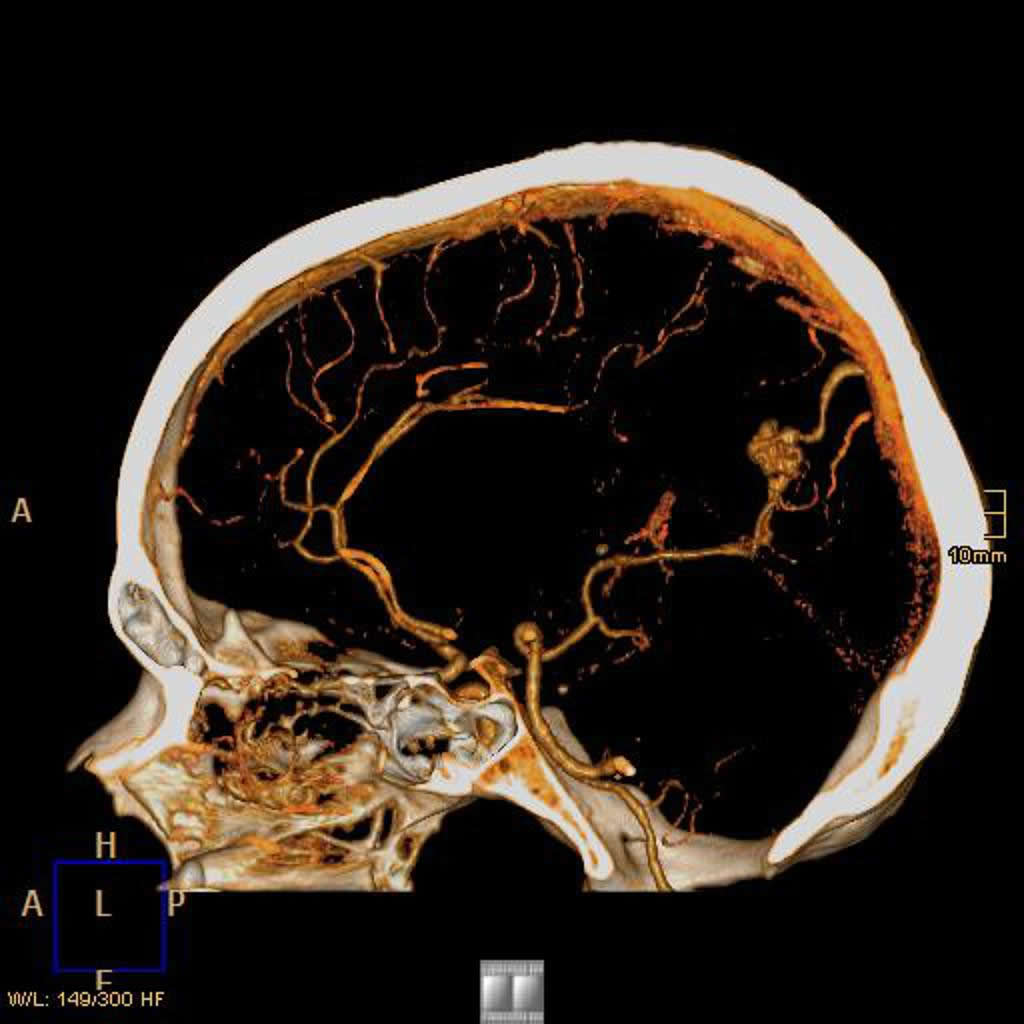 Although many of the arteriovenous malformation (AVM, angioma, hemangioma) of the brain eventually break, the final decision about surgery is usually deferred until the period after the first break. Risk of re-rupture is 3% per year.

The operation for microsurgical resection of an arteriovenous malformation (AVM, angioma, hemangioma) can interface with technical difficulties. It happens that it is impossible to hold in case of difficult localization on important brain structures, or size. In such cases, use other methods of treatment, including artificial intravascular embolization (endovascular occlusion) and radiation therapy (radiosurgery). Radiation therapy (radiosurgery) involves: