Head injury may cause intracerebral hematoma and hematoma, beneath the snaring of the cerebellum (subtentorial), subarachnoid hemorrhage, acute and chronic subdural hematoma and acute epidural hematoma. Intracerebral hematoma in patients with traumatic brain injury most often formed in the temporal lobe and in the lower regions of the frontal lobe of the brain. This should be remembered in all cases where the patient has an acute neurological deficit of unknown origin (hemiparesis, stupor or disorientation), especially if the condition is similar to a stroke occurred after a fall.

For suspected hemorrhage after head injury pacient need to perform magnetic resonance (MRI) or computerized (CT) imaging of the brain. In addition to the survey scan a patient with intracranial hemorrhage, it may require additional treatment with an angiography. Surgical intervention often can save the life of such patients, so the diagnosis of intracerebral hemorrhage should not be missed. 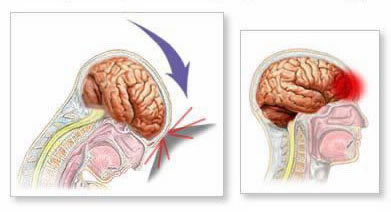 Severe head injury leads to rupture of intracranial vessels and veins of the cerebral cortex with the formation of a hematoma.

Patients with blood diseases, complicated by intracerebral hemorrhage, emergency appointment shows transfusion of fresh frozen plasma. If the bleeding in the brain in a patient against a background of aspirin, we recommend to stop bleeding fresh infusion of platelets. 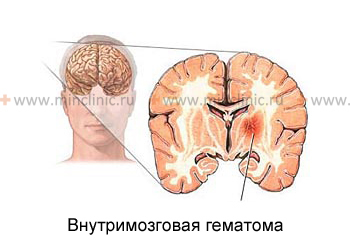 When diseases of the blood of intracerebral hematoma and subarachnoid hemorrhage may have any intracranial localization.

Hemorrhage into a brain tumor

Brain tumors (pituitary makroadenoma, arrow on the right) may be accompanied by intracerebral hemorrhage (two arrows on the left).

Other causes of intracerebral and spinal hemorrhage

Sometimes in patients are detected cerebral hemorrhages of unknown origin. Most often they occur in small angioma (hemangioma, arteriovenous malformations), and vascular disease such as amyloid angiopathy. Primary intraventricular hemorrhage in patients are rare. They are often secondary to bleeding that begins in the brain tissue (parenchymal hemorrhage), and only then penetrating into the ventricular system immediately, without giving the neurological symptoms characteristic of parenchymal hemorrhage.

Bleeding in the brain stem herniation noted at mechanical temporal lobes, accompanied by twisting of the brain stem. These hemorrhages occur when the patient is already comatose, so do not show neurological clinic of a stroke.

Inflammation of the arteries and veins, especially periarteritis nodosa and systemic lupus erythematosus, sometimes leading to bleeding in the central nervous system. Most often, these conditions are combined with hypertension in a patient.

There are other types of hemorrhages. Bleeding into the spinal cord is usually the result of an arteriovenous malformation (AVM, angioma, hemangioma), or metastatic tumor. Epidural spinal haemorrhage usually leads to a rapid compression of the spinal cord and must be recognized by a doctor immediately, because surgical intervention determine the effectiveness of treatment and prevents the development of paralysis of the muscles of the lower limbs (paraplegia).