The term "lacunar infarction" describe atherosclerosis and thrombosis lipogialinoznoe damage with blocked arteries penetrating branches of the circle of Willis, middle cerebral artery trunk, as well as vertebrates and the main arteries of the brain. 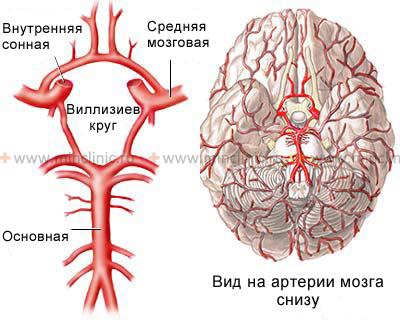 The trunk of the middle cerebral artery, as well as the arteries, forming the Willis' artery (A1 segment of anterior cerebral artery, anterior and posterior communicating artery, prekommunalnye segments posterior cerebral arteries), the main and vertebral arteries all together give the branch diameter 100-400 mm, perforating the deep gray and white matter of the cerebrum and brain stem. Each of these small branches may be subject to a thrombosis in atherothrombotic lesion in its early (branches of the basilar artery lesion or the trunk of the middle cerebral artery) or lipogialinoznom thinning of its walls more remote from the beginning of localization. Thrombosis of these branches develop infarcts of small size (less than 2 cm), which is referred to as gaps. In many cases they are even smaller - 3-4 mm. There is no doubt that a risk factor for such a small vessel lesions is arterial hypertension. The share of lacunar infarcts of the brain accounts for 10 % of cases of ischemic stroke.

The development of cerebral infarction (ischemic stroke) may be accompanied by sporadic or progressive over several days, neurologic deficit. After a few hours or days after the development of cerebral infarction (ischemic stroke), the patient's condition is improving, although some patients become disabled. Recovery of the patient over a period of several weeks to months may be full or remains minimal residual neurological deficit.

Prior to the start of treatment for hypertension multiple gaps often cause patients the development of pseudobulbar palsy with emotional lability, the state of lethargy, abulia, and bilateral pyramidal signs. Currently, the syndrome is rare.

There are other lacunar syndromes have been associated with arterial pathology observed:

Computed tomography (CT) scan of the brain can detect most of the supratentorial lacunar infarcts. Magnetic resonance imaging (MRI) brain reveals how clearly supra- and subtentorial infarcts (lacunae size of 7 mm or more), as well as the distribution of cortical gray matter in the surface of a small infarct in the white matter of the brain. This spread is mainly due to embolism, but no narrowing of the lumen (occlusion) of small penetrating vessels. Therefore, in such situations should not be diagnosing lacunar infarctions.

On brain MRI shows lacunar infarctions in the basal ganglia (top) and white matter of the brain parenchyma (bottom).

Many strokes are larger than 2 cm, combined not only with pure motor hemiparesis in the literature incorrectly called lacunae. They are too big to be the result of occlusion of a single penetrating branch. This is probably embolic infarctions, in which computed tomography (CT) scan of the brain is not able to demonstrate the involvement of the cortical surface. The diagnosis of lacunar infarctions should be placed only when the value of a heart attack is less than 2 cm and its location can be explained by the occlusion of small penetrating branches of one of the major arteries of the base of the brain. Larger deep infarcts in the white matter of the pool I of the middle cerebral artery, probably due to embolism.

Electroencephalography (EEG) is usually normal in contrast to that for heart attacks, affecting the cerebral cortex. If the EEG study, shortly after the onset of symptoms received normal results, this gives reason to think of the deep white matter infarction in the brain.

The effectiveness of anticoagulants and antiplatelet agents in patients with lacunary transient ischemic attack (TIA) and fluctuating stroke is not clear. According to some experts, thalamic lacunae caused lipogialinozom may be combined with minor bleeding (haemorrhage). At autopsy in such infarctions sometimes show hemosiderin macrophages.

The possibility of using heparin in this state as questionable. But, on the other hand, some patients with fluctuating hemiparesis atherothrombotic lesions in the area of the basilar artery branches or outgoing trunk of the middle cerebral artery and arteries of lenticular nuclei in the striatum when administered heparin may show improvement.

Patients with lacunar stroke showed no long-term anticoagulant treatment. At the same time it is necessary to carefully monitor blood pressure in order to prevent the progression of vascular lesions in patients with hypertension, a history of his disease.