Classification based on aneurisms size:

If the aneurysm is located distally to the first bifurcation of the arteries the circle of Willis, mycotic aneurysm should be suspected. It should be remembered as the possibility of bacterial endocarditis, accompanied by embolism and examine blood cultures. If such aneurysms are localized in the arterial network of more distal (cerebellar hemisphere, the cortical surface), they are rarely the source of large amounts of clotted blood in the basal cisterns.

Pronounced cerebral vasospasm in rupture of mycotic aneurysm is almost never observed. However, mycotic aneurysm re-rupture prone. Although antibiotics can reduce the threat of re-hemorrhage, definitive treatment is surgical obliteration. It should be done despite the fact that the patient receives antibiotics over the alleged or actual bacterial endocarditis.

On performed angiography of cerebral arteries in the lateral projection shows a mycotic aneurysm in the parietal-occipital region.

The reason for the appearance of mycotic cerebral aneurysms is a portable infection (bacterial endocarditis). Bacterial emboli from the bloodstream entered into the arterial tree of the brain and cause a blockage of one branch of his arteries. In the arterial wall begins the infectious process, leading eventually to the formation of mycotic aneurysm. William Osler first introduced the concept and described a mycotic aneurysm in 1885 at a lecture by an aneurysm of the aorta in a patient with bacterial endocarditis. This name was later applied to all aneurysms arising after bacterial infection in the vessel wall, including an aneurysm of cerebral arteries.

Bacterial endocarditis, septic emboli causing inflammation and destruction of the wall of an artery in the brain. There is no exact data on the mechanism of mycotic aneurysm in an artery of the brain. According to one theory aneurysm formed in consequence of the destruction of internal infection (endothelium) and the muscular layer of the artery lumen directly, on the other - from the blood vessels feeding the artery wall (vasa vasorum).

Since a high risk of mortality in patients with rupture of such aneurysms is recommended to re- angiography of the arteries of the brain in the dynamics of every 2 weeks during antibiotic treatment until resolution of the aneurysm or the decision of surgical intervention. 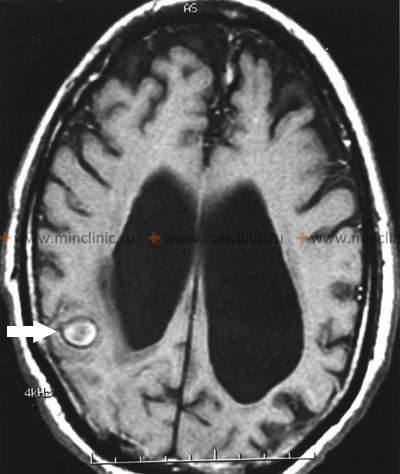 On brain MRI shows a mycotic aneurysm in the right parietal-occipital region of the brain against the background of hydrocephalus (dilated lateral ventricles).

Once identified by mycotic aneurysm on angiography, selective in the future can be monitored by magnetic resonance (MRI) or spiral computed tomography (SCT) of cerebral vessels. These methods are an alternative to CT and is used to safely monitor and measure the size of the aneurysm in a patient during treatment with antibiotics.

The question of treatment of patients with mycotic aneurysm remains controversial. Some doctors argue that we need neurosurgical operation. Others recommend observation of the patient by performing a series of angiograms on a background of antibacterial therapy and promptly lay off the aneurysm, if it persists or increases, in spite of the antibiotics used.

Patients with unruptured mycotic aneurysm of the arteries of the brain can often be successfully treated with antibiotic therapy. In the ruptured aneurysm treated would surgical. Traditionally, neurosurgical treatment of mycotic aneurysm is that it is turned off from the bloodstream and subsequent disposal. Intravascular technique involves the introduction into the lumen of the aneurysm or a special adhesive detachable coil.

Intravascular operation off the blood flow in unruptured mycotic aneurysm with detachable spirals.

Mycotic aneurysm clipping using the apparatus for neuronavigation - a method that requires less manipulation of the brain due to direct access to the aneurysm through the bone hole of small size (minimally invasive craniotomy) and a minimal effect on the cerebral cortex (minimally invasive kortikotomiya) in a patient.

Observations of successful treatment with antibiotics until the mycotic aneurysm is small. Patients may occur spontaneous occlusion of the lumen of the aneurysm until much later pursued his antibacterial therapy. It is also no data that can clearly identify which patients are at risk of rupture mycotic aneurysm, requiring surgical treatment.