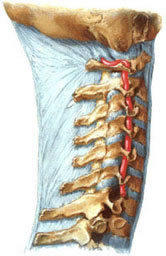 Vertebral arteries pass through the foramens of the transverse processes of the cervical vertebrae.

From the fourth segment of the vertebral artery, small penetrating branches emerge, supplying the medial and lateral segments of the medulla with blood, as well as a large branch — the posterior inferior cerebellar artery (PICA). The proximal segments of the PICA supply blood to the lateral sections of the medulla, the distal branches of the medulla are the lower surface of the cerebellum. There are anastomoses between the ascending cervical artery, thyrocervical artery, occipital artery (branch of the external carotid artery) and the second segment of the vertebral artery. In 10% of patients, one of the vertebral arteries is insufficiently developed (atresia of the artery) in order to play an essential role in the blood supply of the brain stem structures. 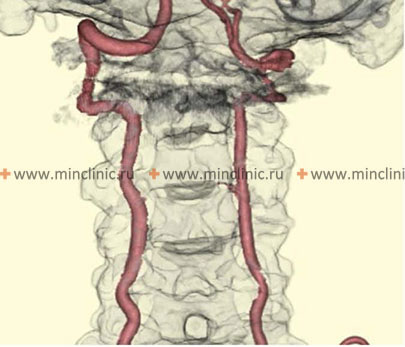 Variation of vascular and bone anomalies is examined in multislice computer angiography with intravenous contrast in patients with any congenital developmental anomalies or acquired diseases, such as:

Predisposition to the development of atherosclerosis with thrombosis has the first and fourth segment of the vertebral artery. Although the atherosclerotic narrowing of the first segment (the beginning of the artery) can be significant, it rarely leads to an ischemic stroke with a brainstem lesion. Collateral blood flow from the opposite vertebral artery or ascending cervical and thyrocervical arteries or from the occipital artery is usually sufficient.

In those cases where there is hypoplasia (atresia) of one vertebral artery and the initial portion of the other vertebral artery has an atherosclerotic lesion, the only possible sources of collateral blood flow remain the ascending cervical, thyroid-cervical and occipital artery or retrograde blood flow from the basilar artery through the posterior communicating. In such circumstances, the blood flow in the vertebral-basilar system is deteriorating and there are transient ischemic attack (TIA). In addition, the possible formation of initial thrombosis of distal basilar and proximal vertebral localization. 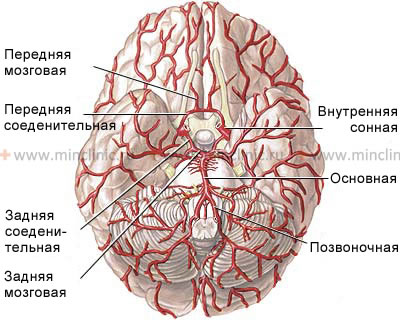 Vertebral arteries merge and form the basilar artery.
Posterior inferior cerebellar artery (PICA) arises from the terminal vertebral artery and courses around the lateral medulla to supply it.

Although the lesion of the vessel with atherosclerosis rarely gives a narrowing of the second and third segments of the vertebral artery, these segments are susceptible to developing dissection, fibro-muscular dysplasia and, in rare cases, arterial damage due to the effects of osteophytes and arthritic changes in the holes of the transverse processes of the cervical vertebrae.

Transient ischemic attacks (TIA), which develop with insufficient blood supply in the basin of the vertebral artery, causes dizziness, numbness on the face of the same name and in opposite extremities, double vision, dysphonia (swelling of the voice), dysphagia (difficulty swallowing) and dysarthria (difficulty speaking pronunciation ). Hemiparesis (weakness of the muscles of the body half) in patients is extremely rare. Such transient ischemic attacks (TIA) are short (up to 10-15 min) and are repeated in the patient many times during the day.

If cerebral infarcts (ischemic strokes) develop, then most often they affect the lateral parts of the medulla with the involvement of the posterior part of the cerebellum (Wallenberg's syndrome) or without it. Its manifestations are listed in the table below. In 80% of patients, Wallenberg's syndrome develops after occlusion of the vertebral artery, and in 20% — in occlusion of the posterior inferior cerebellar artery (PICA). Atherosclerosis with thrombosis, occluding the penetrating medullary branches of the vertebral or posterior inferior cerebellar arteries (PICA), leads to the onset of partial syndromes of ipsilateral lesions of the lateral and median segments of the medulla.

Due to acute posterior inferior cerebellar artery (PICA) related infarction the patient has the following lateral medullary syndrome of Wallenberg:

Cerebellar infarction (ischemic stroke) with concomitant cerebral edema can lead to a sudden stop of breathing due to increased intracranial pressure in the posterior cranial fossa. Drowsiness (hypersomnia), Babinsky's symptom, speech disorder (dysarthria) and bilateral weakness of facial muscles are often absent or found only shortly before the onset of respiratory arrest. Imbalance in walking (ataxia), dizziness, nausea and vomiting can be among the few early symptoms and should raise suspicions about the possibility of developing this complication.

When transient ischemic attack (TIA) with the clinic of lesions of the lateral divisions of the medulla, it is important to determine the adequacy of the blood flow:

For the purpose of diagnosis, angiography is prescribed. With computed tomography (CT), you can find an extensive cerebellar infarction in the basin of the posterior inferior cerebellar artery. Magnetic resonance imaging (MRI) enables early detection of cerebellar infarction and, as far as technical improvement, will allow to diagnose the lateral infarction of the medulla oblongata. It has already become possible to visualize the fourth segment of the vertebral artery, if it has blood flow.

Later, using high-field magnetic resonance imaging (MRI with 3 Tesla and more) in the angiography mode of the cerebral vessels it became possible to obtain an image of atherosclerosis with thrombosis in the vertebral and basilar arteries. It is also possible to establish patency or occlusion (blockage) of the vertebral and inferior cerebellar artery.

Magnetic resonance imaging angiography (MRI angiography) of cerebral vessels on a high-field tomograph (3 Tesla) allows the doctor to replace the relatively dangerous and harmful for the patient angiographic study of cerebral blood flow with intravenous contrast in computed tomography (CT). 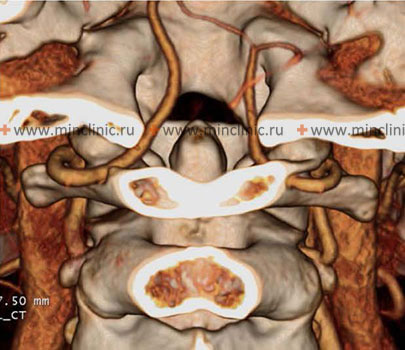 Multislice computed tomography (3D CT) of the vertebral arteries and the cervical-occipital junction.

When treating patients with ischemia or infarction of the brain (cerebellum, medulla) in the basin of the vertebral or posterior inferior cerebellar artery (PICA) there are four important questions:

Aneurysms located at the proximal posterior inferior cerebellar artery (PICA) may need to be cliped and concomitant bypass. End-to-side anastomosis of the occipital artery to PICA is one bypass option in these cases for lateral medullary syndrome prophilaxy.