Sigmoid sinus suppurative thrombophlebitis with thrombosis — is complication is one of the most frequent in inflammatory diseases of the ear, furuncles on the face. Due to direct contact with the posterolateral wall of the mastoid process, sigmoid sinus is sometimes involved in the inflammatory process of the ear, especially since small veins of the mastoid process are infused into it.

Magnetic resonance angiography of the brain vessels and venous sinuses is performed with suspicion of sigmoid sinus thrombophlebitis and thrombosis.

The causative agents of sigmoid sinus of thrombophlebitis and thrombosis are streptococcus, staphylococcus, pneumococcus and other bacteria. The mixed bacterial flora prevails.

Thrombophlebitis of the sigmoid sinus arises most often by contact (due to the inflammatory process in the adjacent bone or perisinus abscess), much less often with blood or lymph flow (hematogenous and lymphogenous pathways with furuncles on the face).

The outer wall of the sigmoid sinus thickens and changes color. Wall of sigmoid sinus. From blue it becomes white or yellow-gray. Subsequently formed granulation or necrosis. If the operation is not performed in a timely manner, the inflammatory process extends to the inner endothelial layer of the sigmoid sinus wall.

Damage to the endothelium and changes in the biochemical composition of the blood caused by permeated microbes or their toxins in combination with a slowing of the blood flow lead to the formation of a parietal and then occlusive clot burden (sigmoid sinus thrombosis). 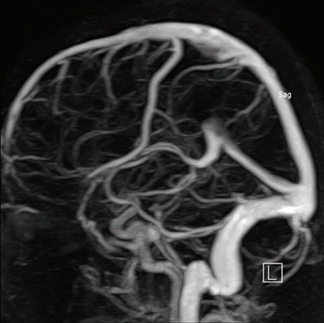 Sigmoid sinus Thrombosis is often limited, but it can sometimes spread retrograde to the transverse sinus until the venous sinuses merge or even the sinuses of the opposite side, and downwards to the bulb of the jugular vein and the jugular vein until the innominate vein. Possible spread of thrombosis into the upper and inferior petrosal and cavernous sinuses.

The formation of thrombus is a protective reaction to the penetration of infection, but at the same time a dangerous complication of thrombophlebitis. With a weakly virulent infection and good immunobiological reactions, the thrombus can remain sterile (there are cases of the unexpected finding of an old thrombus in the sigmoid sinus in persons on brain MR-angiography or who have died from diseases not related to the ear). However, in the predominant majority of cases, the thrombus becomes infected, often becomes inflamed and becomes the source of infection. With blood flow, infected emboli or bacteria enter the small or large circle of blood circulation.

With chronic otitis, thrombus metastases predominate in the lungs. Perhaps the retrograde spread of thrombus to the veins of the meninges that enter the transverse sinus with the formation of an abscess in the cerebellum or occipital lobe of the brain. Cerebral or cerebellar abscess can also occur with a suppurative thrombus by destroying the inner wall of the sinus and extending the process to the subarachnoid space and the brain tissue.

Sepsis (SIRS) can develop as a result of the entry of the microbe through the sinus wall and without the formation of a clot burden (more often with acute otitis). Finally, a form of sepsis is very rare, which is caused by infection in the general circulation flow from multiple thrombosed small bony veins of the mastoid process (osteo-phlebitic piemia).

Sepsis (systemic inflammatory response syndrome, SIRS) in consequence of otitis is a common infectious disease. More often sepsis is characterized by the following triad of syndromes:

Less often sepsis (SIRS) proceeds with a high temperature of the type of continua without chills, without the formation of abscesses, but with septic damage to the endocardium, kidneys, liver, intestinal tract and other organs, with severe intoxication of the central nervous system.

The course of sepsis (SIRS) is more severe and quickly leads to death. However, the most common mixed form of sepsis — the so-called pyosepticemia.

The first, most frequent, type of sepsis in children usually occurs without chills, with a high temperature of a constant nature. In adults, to understand the true nature of the temperature curve, it is necessary to measure the temperature every 3 hours. The pulse is frequent, small, usually corresponds to temperature. The remaining frequent pulse after a decrease in temperature is prognostically unfavorable. The patient's face is pale, often has a jaundiced or earthy tinge.

Sometimes patients are excited, euphoric, sometimes sluggish, apathetic. Due to circulatory disorders, infection of the brain tissue, there is an increase in intracranial pressure, changes in the fundus, focal brain symptoms. Possible concomitant meningitis or meningism as a result of toxic stimulation of the meninges.

In severe forms of sepsis, toxigenic granularity of neutrophils is also observed. Erythrocyte sedimentation rate (ESR) with sepsis is sharply increased. The dynamics of changes in blood is of great importance for assessing the course of the process and the prognosis.

Depending on the location of metastases, may occur symptoms of certain organs damage. Pulmonary metastases often occur with chronic otitis, they proceed as a type of septic pneumonia with the formation of multiple and small abscesses, the latter being located mostly around the periphery of the lung (in the places of the final branching of the pulmonary arteries).

Abscesses can erupt into the bronchus (favorable outcome) or into the pleural cavity with the formation of purulent pleurisy. Metastases in the joint capsule can lead to ankylosis of the joints. The most favorable are metastases in the subcutaneous tissue and muscles.

Local symptoms of sigmoid sinus thrombosis mostly little or not expressed. Sometimes the observed swelling and tenderness at palpation along the posterior margin of the mastoid process (Grisinger's symptom) can be a consequence of both thrombosis and perisinus abscess. Thrombosis of the bulb of the jugular vein is very rarely manifested in the form of a deficiency of IX–XII cranial nerves. Sometimes this lesion is a consequence of not a thrombosis, but a periphlebitis.

More reliable thrombosis of the bulb of the jugular vein is revealed during surgery on the sigmoid sinus (no bleeding after removal of the thrombus from the lower sinus segment).

Symptoms of thrombosis of the internal jugular vein are also not characteristic, soreness in palpation and palpation of a tight strand along the vein (especially in its upper segment) may be a manifestation of both thrombosis and periphlebitis.

Sepsis in otitis sometimes has a prolonged course. In the past, the outcome was mostly fatal due to progressive heart weakness, lung gangrene, pyotorax or purulent meningitis, cerebral or cerebellar abscess. With the introduction of surgical treatment, and later sulfonamides and especially antibiotics most of the patients can be cured.

However, antibiotics significantly changed the symptoms and course of otogenic sepsis, which in many cases makes diagnosis difficult. In connection with the scarcity, sometimes even the absence of symptoms, the classic picture of sepsis described above with otitis is rarely found today. So, now there is often a non-temperature or subfebrile course, no chills, no symptoms of general intoxication, no meningeal symptoms. Significantly less marked leukocytosis, shift leucocyte count in the blood test.

Even less often than before, local symptoms of peri-sinus abscess, sinustrombosis, thrombophlebitis and periphlebitis of the jugular vein are noted. Finally, patients with sinus thrombosis with concomitant cerebral edema, neuromuscular encephalitis of the brain or cerebellum, hydrocephalus are more often found. These are those patients who previously spread the infected thrombosis to the veins of the meninges complicated by purulent meningitis or brain abscess leading to death. The use of antibiotics eliminated the threat of purulent meningeal and brain complications, but did not eliminate stagnant phenomena associated with sterile thrombosis.

In typical cases of otogenic sepsis with characteristic changes in the blood, the diagnosis can be made fairly quickly, especially in the presence of acute or exacerbation of chronic purulent otitis media. It is important to establish the initial symptoms of this complication, since a timely operation on the ear can prevent the development of metastases. Should be carefully collected history with the initial symptoms observed before prescribing antibiotics.

In the absence of acute or exacerbation of chronic otitis and an unclear clinical picture, it is necessary to exclude malaria, typhoid, pneumonia, miliary tuberculosis.

The great value has presence of microbes in the blood, however, the sterility of blood cultures is not evidence against sepsis. Blood cultures for sterility should be done in the first days of the fever.

First of all, is performed ear surgery (simple or general — according to the nature of otitis media). Necessarily exposed wall of sigmoid sinus. If the latter is pathologically altered, it is recommended that it be widely exposed upward and downward from a healthy-looking area.

Then produce sinus puncture. Puncture of the sinus is also mandatory if the wall is not changed, but there is a marked picture of sepsis. If a thrombus is found, the outer sinus wall is resected to form a wide window. The thrombus is removed as much as possible until bleeding occurs from the upper and lower segments of the sinus. Bleeding is stopped by inserting a tampon between both sinus segments and bone.

In the absence of a pronounced effect of the operation on the sinus, especially when the complete removal of the thrombus from the lower part of it failed, in the next few days the internal jugular vein is ligated, the upper segment is sewn into the skin and through it a thrombus is wash out from the bulb of the jugular vein and the adjacent segment of the sinus. Operation on the jugular vein (resection of the vein) is made even with obvious signs of her thrombosis.

Postoperative treatment consists in the administration of antibiotics with sulfonamides. Depending on the effect of treatment or the sensitivity of the microbe to the antibiotic, other antibiotics are additionally prescribed.

Also used anticoagulants. Anticoagulants, clot burden dissolving, promote the penetration of antibiotics in the areas of the venous system that is affected by septic thrombophlebitis, and enhance the effect of antibiotics.

Anticoagulants are especially indicated when the venous sinuses of the skull (cavernous sinus) are involved in the thrombotic process, which are not widely available for surgical intervention, and with the extensive dissemination of thrombosis through the venous system outside the skull (innominate, subclavian veins).

For the prevention and treatment of lesions associated with the use of anticoagulants, vitamins K, P and ascorbic acid are indicated.

Anticoagulants are contraindicated in cases of impaired liver function, peptic ulcer and duodenal ulcer. They should not be administered during menstruation. Food should be easily digestible, rich in vitamins. Plentiful drink indicated.