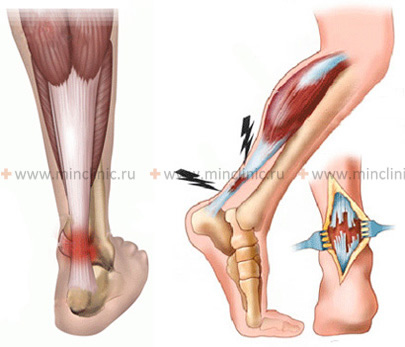 Causes of achilles tendon rupture: a direct trauma (a blow on the tendon with a hard object), the indirect impact of the sharp reduction in leg muscles.

Near the insertion of the Achilles tendon is a bursa. The appearance on the Achilles tendon restricted area located a short distance from the calcaneal tuber, due to the fact that at this point tendon fibers coming from each of the heads of the gastrocnemius muscle, crossing each other, the fiber running from the medial head, lay on top of the fibers coming from the side head. Strong development of the calcaneus in humans depends, firstly, from the fact that it is back strong point of the foot, which pushes the weight of the body, and secondly, because this bone, with a single tendon, concentrated the whole force of the two powerful calf muscles - m. gastrochnemii and m. solei, raising the walking human body weight.

Achillodynia (paratenonitis, retrocalcaneobursitis) — this disease is one of the heel bags, namely, that which is located on the rear surface of the calcaneal tuber, under the Achilles tendon (bursa tendinis calcanei (Achillis)). Disease of the bursa and other terms mean, such as: calcaneodynia, bursitis subachillis, bursitis retrocalcanea, morbus Alberti.

Frequent cause achillodynia is also gonorrhea, which from all mucous bags izlyubleno, striking a bag of Achilles tendon. The clinical picture of gonorrhea lesions bags Achilles tendon, in contrast to other infections and from traumatic bursitis is characterized by the sudden starting and rapidly developing persistent, sharp, and sometimes unbearable heel area pain and inflammatory swelling. Heel pain in achillodynia developed especially after the walk and do not always run alone. Stop at achillodynia is in the seizure of plantar flexion, while the rear of the bend, when the Achilles tendon is approaching and pressing on the bag, the heel pain increased.

In the differential diagnostic terms, in addition to infectious and simple bursitis surge and rubbing, it is necessary to distinguish even small detachments of the upper calcaneal tuberosity, giving the Spurs here later. They are often seen in involved in sports, the players, and in general for highly strained calf muscle. 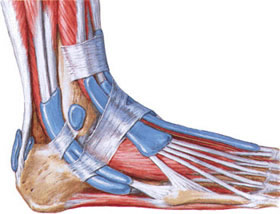 Near the insertion of the Achilles tendon is a bursa, porpzhaemaya at achillodynia.

But the surest and quickest method of treatment later referred to a chronic state of bursitis, it is necessary to recognize the surgical removal of a sick bag mucosal incision at the side of the Achilles tendon. Full recovery of walking this treatment achillodynia (paratenonitis, ahillobursitis) is obtained after three or four weeks. 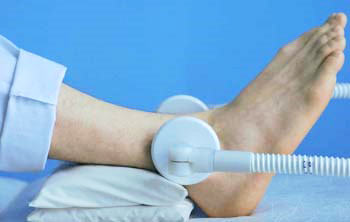 Trauma (fracture) the Achilles tendon usually occurs in people aged 30-50 years. Habitual tendon rupture is 4-5 cm from the insertion of it to the heel bone. This is due to the fact that at this point the tendon blood supply had worsened.

Causes of Achilles tendon rupture can be as direct trauma (eg, a blow on the tendon with a hard object), and indirect effects of the sharp reduction in leg muscles.

The Achilles tendon is the thick and the strongest of all the tendons of the human body.

Often breaks occur when a sudden sharp pressure on the tendon at the start of a sprinter, during a jump, with a sharp dorsiflexion of the foot - falls from height. With the direct injury cutting instrument may be a partial tendon injury.

Usually appears at the beginning of an acute heel pain in the Achilles tendon. In the area of the tendon marked edema. When the feeling we can determine the integrity of the tendon defect. Active plantar flexion is difficult or even impossible.

Radiography at rupture of achilles tendon is almost nothing, because the tendon tissue does not stop X-rays. But in some cases it may indirectly indicate the presence of tendon injuries, such as identifying fracture tibia.

In addition, the diagnosis of rupture used ultrasound diagnosis and magnetic resonance imaging. 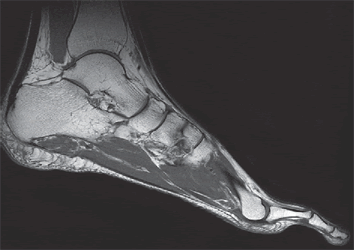 MRI of the ankle ligaments may sometimes be necessary in case of rupture of the Achilles tendon or its extension.

Typically, when his Achilles tendon rupture sew. At breaks not older than two weeks, you can apply the closed percutaneous suture with subsequent immobilization plaster cast. For a month. A month later, sutures are removed and re-impose a plaster cast for a month. When chronic ruptures applies the open method of suturing the tendon.

Treatment of heel pain it is usually the local or block anesthesia is used. Skin incision was performed at the site of the defect tendon. The ends of the tendon are allocated, segregated from adhesions to the surrounding tissues. Further held suturing the ends of the tendon. 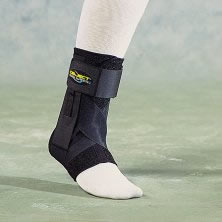 Fixing brace for ankle in the treatment of achilles tendon injuries (rupture, sprain).