Contracture - is the restriction of mobility in joints that occurs as a result of changes in articular surfaces or functionally related to the joint tissues. Distinguish flexion contracture, extensor contracture, the outlet contracture resulting contracture, and others.

Joint contractures at birth may be congenital or acquired. The basis of congenital contractures of the joints is hypoplasia of muscles and joints themselves (torticollis, arthrogryposis, clubfoot). Acquired contracture of joints can be:

Cicatrical joint contracture (dermostenosis) is observed after suffered skin burns (thermal or chemical). Often occurs in children as a tightening of gross keloids skin, which lead to the concretionary fingers, pull the forearm to the shoulder, arm and torso. Joint contractures may also occur due to skin defects on the basis of mechanical trauma with subsequent ulceration of her.

Desmognathous joint contracture occurs due to the upcoming of wrinkling subcutaneous tissue after inflammatory processes. For example, after quinsy torticollis may occur.

Neurogenic joint contracture occur when flaccid and spastic paralysis on the grounds of injury or inflammation, and (rarely) on the background of hysteria.

There are several groups of neurogenic contractures of joints:

Conditioned reflex contracture of the joint develops in the presence of functional adaptive or compensatory responses. For example, by shortening of the lower extremity patient extend it due to plantar flexion of the foot and rests it on the peripheral division (strephopodia).

Misalignment of the pelvis and the associated development of scoliosis (spinal curvature) is observed in case of irregular length of the lower extremities.

Professional joint contractures develop in connection with the performance of certain work in individuals exposed to long-term occupational hazard. Joint contractures occur acutely or may be due to chronic trauma on the background of functional loads parts of the body.

Joint contractures resulting from chronic injury in a static scoliosis as a result of a long asymmetric torso.

Symptoms and clinical manifestation of joint contractures depend on:

In chronic pathological processes contracture develops slowly, and in acute inflammatory processes in joints, muscles and other tissues - rapidly. The more difficult the disease process, the more sharply pronounced contracture. 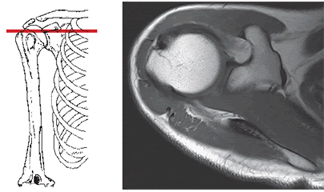 MRI of the shoulder joint in the axial proektsiipri for contracture shoulder (scapulohumeral periarthrosis).

Particularly sharp contraction expressed in diseases and injuries of the joints, often accompanied in these cases, the atrophy of the soft tissue above and below the contracture. If the contracture has developed in childhood, certainly lagging behind in growth. 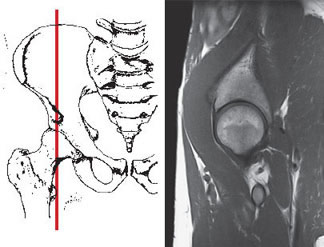 MRI of the hip in the sagittal projection (ligaments, cartilage) when contracture.

To clarify the nature of the changes in the affected joint is required: 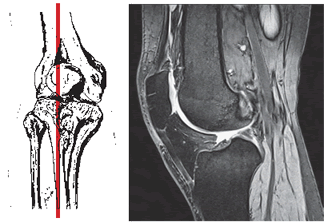 MRI of the knee in the sagittal projection (ligament, meniscus, articular cartilage) in contracture.

Depending on the degree and type of joint damage during contraction, the following therapeutic action: 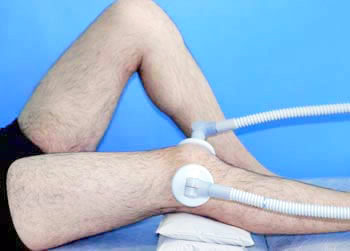 In the treatment of joint contractures eliminate swelling, inflammation, pain, restore range of motion in the knee joint and its muscles accelerated by the use of physiotherapy.