Minimally Invasive Neurosurgery Clinic offers you modern opertivnost treatment to eliminate valgus deformity. This operation is so simple that even a few hours you will be able to stand up. During the operational vmeshaetlstva performed small surgical access that vposleduyuschem heals almost without a trace. After surgery, you will restore very quickly and in a short time will not feel any discomfort while walking. Ease and speed of operation enables it simultaneously on both feet.

Most often valgus foot is hereditary. Short and tight shoes can serve as a precipitating factor for the occurrence of deformation (especially women). The degree of foot deformation may range from a slight deflection of the finger to a significant displacement of all the first metatarsophalangeal joint.

The emergence and development of hallux valgus is due to the deformation of the forefoot that is associated with changes in the middle and rearfoot.

When deletion of the lowering of the longitudinal arch and heel inward (pronation) is shifted inwards midfoot, especially talus and the navicular bone, as well as its extension due to hyperextension of the ligamentous apparatus. There is an increase of pressure on the part of these bones in the cuneiform bones, which in turn acts in the Lisfranc joint (joint located between the bones of the tarsus - three cuneiform and cuboid one - and metatarsals) based on the I-IV metatarsals. Shifting the bases and pushing I-IV metatarsal bones outwards, pronation them where the pivot point is the head of the bone. There is a reduction of I-IV metatarsal bones in the distal deviation outwards in proksamalnoy parts and pronation.

The deviation of the big toe outward tension of the muscles contribute to tapping the thumb and the muscles razgebatelya length of the thumb, which is shifted with respect to the above first metatarsal bone.

Thus, there is a displacement inwards substantially only the forefoot in relation to the average. Thus the angle between I and II metatarsal bones will change little. In this situation, extensor digitorum longus tendon, leaving the displaced and the grounds metatarsal bones, promote a shift finger outwards, but because of the flattening of the transverse arch II-IV fingers move up and more. The tendon of the long razgebatelya fifth finger, moving inwards relative to the entire calcaneus metatarsal bone, helps bring and subluxation of the fifth finger inwards relative to the head of the metatarsal bone.

Patients with hollow soles occurs isolated load on the forefoot. They have been isolated from the flat cross-hallux valgus deformity of the first finger.

Hollow foot is formed due to deformation of the foot when the height and the curvature of the longitudinal arch increases.

Characteristic features are- subcutaneous "bump" on the inner surface of the head of the first metatarsal bone, the outer offset of the first finger, often with hallux valgus rotation of the latter. Irritation tissue medial first metatarsophalangeal sustva can cause medial bursitis, accompanied by inflammation underlying tissues, or neuritis of the medial cutaneous nerve of the rear. Patients noted a progressive increase in the width of the foot, which causes difficulty in selecting and wearing shoes. 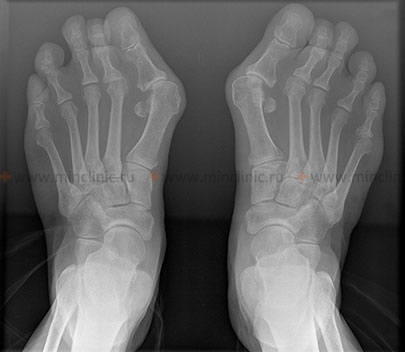 The deviation of the first metatarsal bone (Metatarsus varus) deformtsiyu increases, which in turn, causes a restriction of movements in the first metatarsophalangeal joint as a result of osteochondral exostosis (growths). Changes in the articular surfaces is the cause of Hallus rigidus.

Valgus deviation of the I toe (Bunion (hallux valgus)) is accompanied by numerous violations:

When symptoms of hallux valgus foot begin to affect quality of life, the beginning of the treatment involves wearing a wide, soft, low-heeled shoes, the corresponding shape of the foot, as well as the use of individual orthopedic insoles, inserts, soft pads under the "bump" analgesics.

To assess the foot deformation is consulted an orthopedic specialist. Clinical examination feet held to the presence of radiological images in dorsoplantarnoy and lateral views under load on the forefoot, better standing. Then, using X-rays measured degree of deformation.

Grade I of deformation: 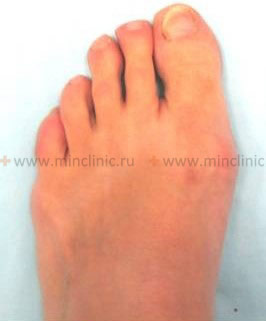 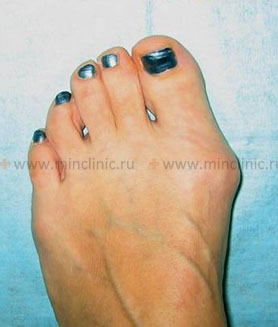 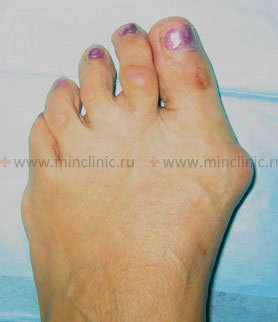 Bunion (hallux valgus) conservative treatment is performed in the disease beginning and is used as a preventive antiprogressiruyuschee event will offload the forefoot, reduce pain (metetarzalgiya) slow deformation of the toes. For konsrevativnogo treatment it is necessary to wear orthopedic insoles, InterDigital partitions and other offsets that can be purchased in orthopedic showrooms.

Other ways to relieve pain during metatarsalgia:

The indications for surgical treatment of hallux valgus foot are:

Preoperative preparation of the patient:

The rehabilitation period after surgery: