The degree of opacity of liquor is determined by comparing it with distilled water, poured into the same test tube, in transmitted daylight on a black background.

The presence of blood in the cerebrospinal fluid can detect macro- and microscopically. Distinguish traumatic tap (artifact) and true erythrocytearchia.

Traumatic tap erythrocytearchia is caused by ingress of blood into the CSF upon injury of blood vessels during the execution of the lumbar puncture.

The amount of blood trapped in the CSF space, may vary from 0.01 to 90 ml. When the content of red blood cells less 0,1-0,15*109/L cerebrospinal fluid is colorless. A positive reaction in diagnostic zone of the test strip to the blood and the detection of red blood cells on microscopic examination of native preparation of liquor allow you to diagnose hidden erythrocytearchia.

Erythrocytearchia indicates intracranial bleeding resulting from brain vessels aneurysm rupture, hemorrhagic stroke, hemorrhage in the brain tissue, hemorrhagic encephalitis, traumatic brain injury. Subarachnoid hemorrhage may occur as a result of paralysis of vasomotor nerves, and is accompanied by vasodilatation, stasis of blood in the capillaries and diapedesis of red blood cells.

Red blood cells disappear from the CSF at 5-10 days in mild traumatic brain injury and the exclusion of bleeding, in hemorrhagic stroke and severe head injury – at 10-20 a days, aneurysm rupture – at 40-80 days.

Hemorrhagic xantochromia (bilirubinarchia) caused by ingress in a CSF space of blood, the decay of which leads to staining of the liquor in the pink, then orange and yellow. In hemorrhagic stroke, aneurysm rupture or craniocerebral trauma accompanied by massive hemorrhage, xantochromia appears in 1 days, with subarachnoid hemorrhage increases its intensity in 2-4 days.

Congestive xantochromia (bilirubinarchia) occurs in vascularized tumors of the central nervous system, directly connected to the CSF spaces in the blockade of the subarachnoid space, compression, meningitis (mainly for tuberculosis), arachnoiditis, etc.

Physiological xantochromia (bilirubinarchia) is common in infants and almost all premature. This phenomenon can be explained by increased permeability of the blood-brain barrier for bilirubin in blood plasma.

False xantochromia (bilirubinarchia) is caused by penetration into the cerebrospinal fluid of lipochromes or drugs, for example penicillin.

Green color of the liquor is observed in severe xantochromia (bilirubinarchia) in the oxidation of bilirubin to biliverdin. Green color also gives the admixture of pus, cerebrospinal fluid is cloudy. Such green color CSF gets in purulent meningitis, the breakthrough of a brain abscess into the subarachnoid space or into the ventricles.

pH is one of relatively stable biochemical parameters of cerebrospinal fluid. In healthy people the pH of lumbar CSF is 7.28-7.32. The pH change in the cerebrospinal fluid affects alveolar ventilation, cerebral circulation and consciousness.

Metabolic alkalosis is observed in liver disease, prolonged vomiting, intake of alkaline substances. And the cerebrospinal fluid pH may be reduced paradoxically to 7.27.

In respiratory acidosis due to pulmonary insufficiency, CSF pH will decrease slightly.

Low protein concentration in CSF (hypoproteinarchia) is the reduction in the protein content of lumbar cerebrospinal fluid below 0.2 g/L, is considered as hydrocephalic CSF.

High protein concentration in CSF (hyperproteinarchia) is the increase in protein content in the cerebrospinal fluid, possible due to:

In healthy adults approximately 83% of the proteins of cerebrospinal fluid accounts for the proteins of the blood serum, however, 17% is of intrathecal origin (prealbumin, prostaglandin-D-synthase, the neuron-specific enolase, S100 protein, etc.).

The main mass of the total CSF protein is albumin, which has exclusively serum origin. In the normal CSF albumin content varies from 0.07 to 0.36 g/Ll and above. Almost any breach of the blood-brain barrier (BBB) leading to an increase in the absolute concentration of albumin in CSF and increase in the ratio of the concentration of CSF albumin/serum albumin. The ratio of albumin/globulin in the CSF regulates the osmotic pressure in the CNS.

At normal blood glucose level in lumbar cerebrospinal fluid glucose concentration is approximately 60% of the level in plasma. If hyperglycemia is the difference between CSF and blood increases significantly, in the CSF glucose reaches only 30-35% of the plasma level. The level of glucose in CSF is one of the important indicators of function of blood-brain barrier (BBB).

Hypoglycarchia is the reduction of glucose below 2,2 mmol/l or a ratio of blood glucose/cerebrospinal fluid glucose less than 0.3. Observed at:

Hyperglycarchia — the increase of glucose level of CSF is rare, not typical even for diabetes. Observed at:

Normally, ketones in the cerebrospinal fluid are not detected. Ketonearchia develops after:

Ketonearchia explained by the collapse of the protein and impaired utilization of ketone bodies, that normally are substrates for cells of the central nervous system.

Nitrites – is a waste product of many bacteria. Thus, a positive reaction to nitrites talking about bacterial meningitis. At the same time it must be remembered that this test will be negative in tuberculous and staphylococcal meningitis, as these agents do not restore the nitrate to nitrite.

In normal cerebrospinal fluid of an adult is practically no cellular elements: in ventricular CSF – 0-1 cells/µl, suboccipital CSF – 2-3 cells/μl in lumbar CSF – 3-5 cells/μl.

The increase in the number of cells in the cerebrospinal fluid (pleocytosis) is considered as a symptom of organic lesions of the central nervous system. Pleocytosis divided on:

CSF formula of healthy individuals are mostly represented by lymphocytes (70%) and monocytes (30%). In the cerebrospinal fluid of newborn also present neutrophilic granulocytes, whose content ranges from 6 to 50%.

Lymphocytes in the amount of 2-4 cells/µl are part of the normal cell count of the cerebrospinal fluid. Normal CSF contains only small lymphocytes.

Monocytes – this is the second main cell population in normal CSF, normal value 1-3 cells/mm. Increasing the number of monocytes in the CSF formula indicated for chronic smoldering inflammation in the central nervous system:

Macrophages belong to the mononuclear phagocyte system in the normal cerebrospinal fluid does not occur. Availability 1-2 macrophages cells/L at normocytosis – a sign of the former bleeding or inflammation of the central nervous system.

Macrophages always found in the cerebrospinal fluid of patients with brain tumors growing in the lumen of the ventricles. A large number of macrophages in the postoperative period, testifies of of active CSF sanation.

Neutrophils in the cerebrospinal fluid of a healthy person almost never occur. This cell of haematogenous origin. Conditions associated with neutrophilic pleocytosis:

Eosinophils in the cerebrospinal fluid of healthy persons do not occur. Their appearance is regarded as a special reaction of the connective tissue vessels in the subarachnoid space on foreign proteins.

Eosinophils in the cerebrospinal fluid play the function of phagocytosis, absorbing bacteria, fungal spores and complexes antigen-antibody, especially with immunoglobulins and components of complement.

Conditions associated with appearance of eosinophils in the cerebrospinal fluid (CSF):

Plasma cells are found in the cerebrospinal fluid only in pathological processes. Plasma cells are formed from B-lymphocytes in the follicles of the cortical areas of lymph nodes and marginal zone of white pulp of the spleen, where when meeting with antigen, they undergo antigen-dependent stage of differentiation. The main function of plasma cells is the synthesis and secretion of antibodies.

Conditions associated with appearance of plasma cells in the cerebrospinal fluid (CSF):

In leukemia patients with involvement of the meninges occurs leukemic meningitis - neuroleukemia. Neuroleukemia more likely to develop in acute leukemia. Usually the number of cells in the cerebrospinal fluid ranging from 100 to 300*106/L, is not excluded higher pleocytosis constituting 5.2*109/L or more.

Malignant lymphoma in patients on the background of the use of chemotherapy and immunosuppressive therapy may develop cryptococcosis, coccidiomycosis, candidomycosis or blastomycotic meningitis, encephalitis or meningoencephalitis.

Arachnoendothelial cells is a single layer of epithelium of ependymal origin, morphologically similar to the mesothelium that covers all the spaces of the CNS filled with CSF, with the exception of the brain ventricles.

Arachnoendothelial cells found in the cerebrospinal fluid of patients with brain tumor, head injury and after operations on the meninges.

Brain and other organs and tissues tumor cells found in the study of cerebrospinal fluid in patients with primary and metastatic CNS tumors. Tumor cells enter into the cerebrospinal fluid as a result of exclusion from the tumor tissue adjacent to CSF spaces, as well as during germination the wall of the brain ventricles or meninges in leptomeningeal carcinomatosis (leptomeningeal metastasis of carcinoma, lymphoma, glioma, melanoma, or sarcoma). 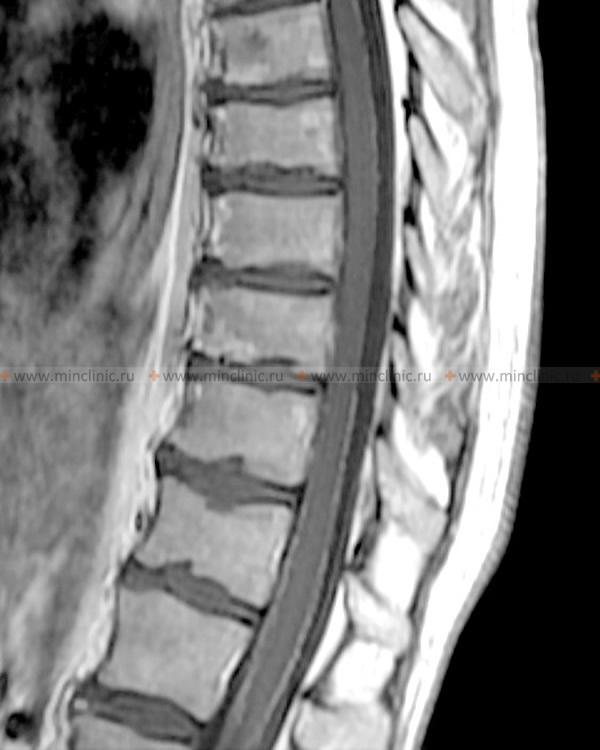