Endoscopic splitting of the carpal ligament "from the outside into the inside" is performed by a method known to each neurosurgeon. A cutaneous incision is made between the thumb and the little finger. 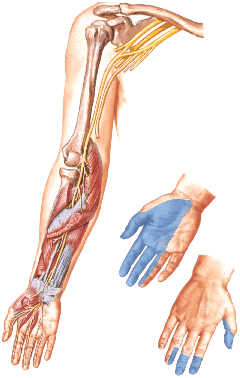 In this way, the skeletonization of the median nerve and, if necessary, a superficial palmar arc can be well performed. In this case, you should avoid the zone of additional intersecting sensory nerves directly from the distal side of the wrist to prevent the possibility of the formation of long-persistent scars or even scar neuroma. The palmar aponeurosis located just below the skin also remains intact.

During the operation by Hegard pins under palmar aponeurosis created an artificial cavity, than placed a trough-shaped hook with a guide channel for optics. The further actions of the neurosurgeon fully correspond to the open ligament dissection: under endoscopic visual control, the carpal ligament is divided gradually with a small SMILLIE knife from the palm to the backside until the tendon sheath sac visualization. The cutaneous wound is sealed, and a soft sterile bandage is applied.

The place of the median nerve compression in the tunnel syndrome at the carpal canal level.