Transforaminal endoscopic discectomy (TFED) is a minimally invasive method of surgical intervention on the structure of the spine in which an endoscope is used. Transforaminal endoscopic discectomy (TFED) is used in the treatment of the herniated disc, disc's protrusion and extrusion, or intervertebral disc’s degeneration (degeneration disc disease, DDD), which are a factors contributing to the formation of irradiative pain in the leg and local back pain.

The endoscope allows neurosurgeon to use a small skin incision (as large as a "keyhole") for access to herniated disc. During accessing to the disk space, the muscles and soft tissues are dilated by blunt obturator, without resection. This leads to less traumatization of tissues, reduction of postoperative pain, patient get early rehabilitation and faster recovery to his normal life and work ability. This method of endoscopic discectomy is also provided without general anesthesia.

Excellent visualization through the endoscope allows neurosurgeon selectively remove part of the herniated nucleus pulposus, which cause pain in the leg and back. Thermal ablation of the external fibrous ring (anulus fibrosus annuloplasty) is an additional procedure and it used for:

For annuloplasty is used thermal energy of a bipolar electrocoagulation or laser. Fibrous ring (anulus fibrosus) is the outer part of the intervertebral disc and consists from a set of interwoven concentric layers. Due to this structure, the weakness or defect in the ring fibers (because of the disc herniation) can be eliminated (shrinked) and the disc can be sealed.

The combination of the annuloplasty procedure and the endoscope technic, which used for transforaminal endoscopic discectomy (TFED), has been developed over many years of practical research. This operation method is the result of the evolution of the technique originally described by Parviz Kambin and called arthroscopic microdiscectomy (AMD).

Operation time is about 45 minutes per damaged disk. On the lumbar region of the back (near the vertebral spine) is performed small skin and subcutaneous tissue (up to 6 mm) incision. During the operation the exact entry point for the endoscopic instruments established by fluoroscopy.

Patient’s Intravenous sedation followed by local anesthesia. The anesthetic will allow the patient to feel comfortable during the operation, but at the same time, a sufficient nerves sensitivity is preserved, so he can describe feelings during the nerve root stimulation or compression elimination.

The operating instrument placed under the control of fluoroscopy. For accessing the intervertebral disc is used a conical probe (obturator) with a lateral opening for palpation and anesthesia of the painful structures. After verifying that the obturator is located in the safe Kambin's triangle (between the descending and exiting spinal nerves), the operating instrument inserted into the intervertebral disc by expanding the fibrous ring’s fibers with a blunt conical probe or by cutting its fibers with trephine.

If conical probe insertion into the annulus fibers is excessively painful for patient, the neurosurgeon through the endoscope can inspect the outer part of this disc. With the help of endoscopy, in addition to the traditionally recognized causes, have been found and documented other factors that contribute to the development of pain in the back and leg. These include congenital anomalies of the spinal roots branches and nerves of the autonomic nervous system, which not previously known.

Surgeons Ian MacNab and John McCullouch described the area of the intervertebral foramen and its extraforaminal part as the "hidden zone". The presence of such abnormal nerves and the growth of nerves from the side of the inflammatory membrane (formed over the sensitive fibrous ring) cause the appearance of pain, which does not correspond to the MRI visual findings. This phenomenon has not yet been fully studied, but these nerves identification and thermal ablation, and reduction factors causing local tissues inflammation have already obtained good results.

Transforaminal endoscopic discectomy (TFED) procedure performed through the cannula located in the blunt obturator, followed by insertion of an endoscope and operating instruments. Both spinal nerves (descending and exiting roots) protected by the cannula, while at the same time a part of the disc that needs surgery will be opened for visualization and accessible for surgical instruments.

The endoscope is inserted into the cannula, which allows neurosurgeon to see the destroyed parts of the nucleus pulposus and selectively remove them through the disc herniation sight. A small amount of the nucleus pulpous tissue is removed from the fibrous ring rupture site. Often some nucleus fragments are visible directly at the site of the fibrous ring rupture, which prevents its healing.

In the modern endoscope is already installed multichannel irrigation, which provides continuous washing of the working cavity with a cooled physiological solution, like in knee joint arthroscopy. The coagulation electrode is used to control bleeding (hemostasis), reduce the disc tissue in the volume, or tighten the diameter of its fibrous ring, and also to ablate the ingrown inflammatory / granulation tissue. Heat from a coagulation probe can also help reduce and remove pain fibers in the annulus.

Biportal access requires the use of two small incisions on both sides of the spine. This allows the neurosurgeon to see the surgical tools inside the disk when the tool size is relatively large for use within the work area.

Sometimes fragments of the disc are identified outside the boundaries of the fibrous ring (sequestered disc herniation). If such migrated fragment cannot be completely removed by endoscopic instruments, may be required subsequent use of traditional open rear access to continue surgical intervention.

Sometimes a repeated endoscopic operation may be required if the rest of the disc herniation is visualized on the control spine MRI after procedure. This occurs in about 10% of cases with sequestered disc herniation. Modern endoscopic techniques will also allow an experienced neurosurgeon to visualize the exiting spinal nerve, which rarely be seen before during traditional surgical intervention for the removal of a herniated intervertebral disc.

Stenosis of the intervertebral foramen (foraminous stenosis) cause the appearance of back pain, which can also be detected before surgery and surgically eliminated.

Transforaminal endoscopic discectomy (TFED) performed like outpatient procedure, and patients usually discharged from the clinic on the same or the next day. 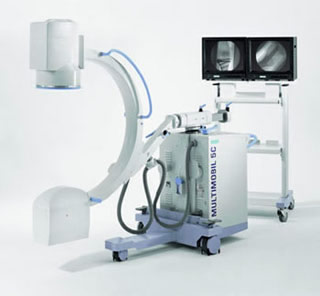 Transforaminal endoscopic discectomy (TFED) is a special surgical technique, as arthroscopy of the knee joint, which is designed for visualization of the disc, spinal canal and adjacent spinal nerves pathology. In the clinic special endoscopic instruments is used to remove the herniated intervertebral disc.

Patients with back pain, who previously needed a stabilizing (fusion) operation (with special cages and transpedicular screws instrumentation), now can be treated with this alternative method of minimally invasive spinal surgery.