In some cases, a herniated disc (sequestered, separated or simply larger sizes) at the lumbar spine level, however, as it is effective has not been pursued by conservative therapy, the patient will still continue to feel pain in my leg. In such cases come to the aid of minimally invasive neurosurgery. 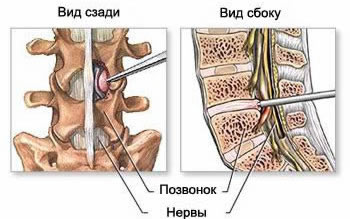 Access Scheme during endoscopic surgery to remove a herniated disc of the lumbar spine.

Description of the operation to remove a herniated disc lumbar spine

Herniated intervertebral disc of the lumbar spine is very common. Although disc herniation is relatively rare require surgical intervention, however, in the U.S. annually more than 200 thousand, and in Germany 20 000 operations on the lumbar spine. The usual surgical treatment is a herniated disc in lumbar discectomy with access to the rear.

The use of an endoscope during surgery allows you to keep the same access and the same technique of operating on the spine with a herniated disc, but the size of skin incision and all access decrease. This method of surgery for a herniated disc of the lumbar spine the same benefits as discectomy, but the direct postoperative consequences are not so complex that provides a quick and peaceful recovery and resumption of previous work.

In addition, the small size of the skin incision in surgery for herniated lumbar disc have certain aesthetic advantages.

Denoted with a marker intervertebral disc of the lumbar spine and the direction of approaching it. A small skin incision is made over the projection of a herniated disc lumbar spine from 10 to 15 mm depending on the completeness of the operated patient.

Dissection of the lumbar aponeurosis with scissors and desinsertion paravertebral muscle arrays from herniated lumbar disc. Insert a mirror, pull mandrin, clean window through circular tongs, put the rest of the endoscopic device and continue to intervene under the control of the camcorder.

Resection of the upper plate (vertebral arch) in order to be able to tilt the top of the Ligamentum flavum, and the articular part of the array (the intervertebral joints) in order to release the outer edge of the "dural funnel and start the affected nerve root.

Stages of the operation of endoscopic removal of herniated lumbar disc.

Dissection of the spine, providing access to the hernia. Having multiple channels for a hernia operation lumbar disc provides an opportunity to better manipulate the anatomical elements in the channel. Hook, by which nerve roots are moved apart, opens the disc herniation and operate it without risk of damage to nerve structures in the lumen of the spinal canal.

Finding the endoscope inside the spinal canal during surgery endoscopic removal of herniated lumbar disc.