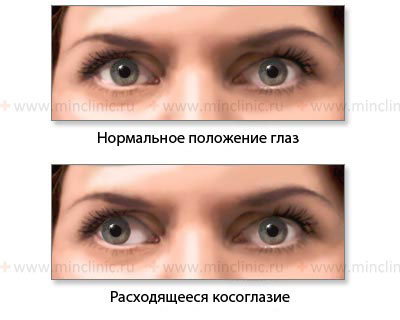 Shows the normal position of the eyeballs and divergent strabismus with weakness of the medial (internal) rectus muscle of the eye on the right (n. Oculomotorius, III pair).

The motor neurons of the abducens nerve (n. Abducens, VI pair), which innervate the lateral (external) rectus muscle of the eye on the side of the same name, are located in the nucleus of the abducens nerve in the caudal part of the bridge. All three oculomotor nerves, leaving the brain stem, pass through the cavernous sinus and enter the orbit through the superior orbital fissure.

Clear binocular vision is provided precisely by the joint activity of individual eye muscles (oculomotor muscles). The friendly movements of the eyeballs are controlled by the supranuclear gaze centers and their connections. Functionally, there are five different supranuclear systems. These systems provide different types of eye movements. Among them some centers control: 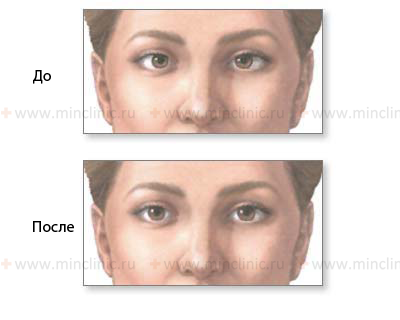 The weakness of the lateral (external) rectus muscle of the right eye (n. Abducens, VI pair) was shown before and after treatment.

Saccadic (rapid) eye movements of the apple appear as a command in the opposite visual field of the frontal cortex of the brain (field 8). An exception is the rapid (saccadic) movements that occur when the central retinal fossa is irritated, which originate from the occipital-parietal region of the brain. These frontal and occipital control centers in the brain have projections on both sides in the supranuclear brainstem centers. The activity of these supranuclear stem centers of vision is also influenced by the cerebellum and the complex of vestibular nuclei. The paracentral parts of the reticular formation of the pons are the brainstem center, providing friendly fast (saccadic) movements of the eyeballs. Simultaneous innervation of the internal (medial) straight and opposite external (lateral) rectus muscles during the movement of the eyeballs horizontally are provided by the medial longitudinal bundle. This medial longitudinal bundle connects the nucleus of the abducens nerve to the subnucleus of the complex of oculomotor nuclei, which are responsible for the innervation of the opposite internal (medial) rectus muscle of the eye. For the beginning of vertical rapid (saccadic) eye movements, bilateral stimulation of the paracentral parts of the reticular formation of the pons from the cortical structures of the brain is required. The paracentral parts of the pons reticular formation transmit signals from the brain stem to the supranuclear centers that control the vertical movements of the eyeballs. Such a supranuclear center of eye movement includes the rostral interstitial nucleus of the medial longitudinal fascicle, located in the midbrain. 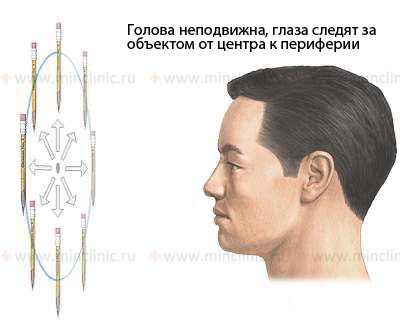 Checking the purposeful movement of the eyes is carried out by tracking the object from the center to the periphery with the patient's head stationery.

The mechanisms for controlling convergent movements are less understood, however, as is known, the neurons responsible for the Convergent eye movements are located in the reticular formation of the midbrain surrounding the complex of the oculomotor nerve nuclei. They give projections into the motor neurons of the internal (medial) rectus muscle of the eye.

Keeping the gaze in a certain position

Stem centers of eye movement are called neural integrators. They are in charge of Keeping the gaze in a certain position. These centers change the incoming signals about the speed of movement of the eyeballs into information about their position. Neurons with this property are located in the bridge below (caudal) to the nucleus of the abducens nerve.

The coordination of eyeball movements in response to changes in gravity and acceleration is carried out by the vestibular system (vestibulo-ocular reflex). In case of the impaired coordination of the movements of both eyes, double vision develops, since the images are projected onto disparate (inappropriate) areas of the retina. In congenital strabismus, or strabismus, an imbalance in the muscles resulting in misalignment of the eyeballs (non-paralytic strabismus) can cause the brain to suppress one of the images. This decrease in visual acuity in the non-fixing eye is called amblyopia without anopsia. In paralytic strabismus, double vision occurs as a result of paralysis of the muscles of the eyeball, usually due to damage to the oculomotor (III), block (IV), or abducens (VI) cranial nerves.

Muscles of the eyeball and gaze palsies

There are three types of paralysis of the external muscles of the eyeball:

Paralysis of individual muscles of the eye

Complete damage to the oculomotor (III) nerve leads to ptosis. Ptosis manifests itself in the form of weakening (paresis) of the muscle that lifts the upper eyelid and impairment of voluntary upward, downward and inward movements of the eyeball, as well as diverging strabismus due to the preservation of the functions of the lateral (lateral) rectus muscle. In case of damage to the oculomotor (III) nerve, pupil dilation and the lack of its response to light (iridoplegia) and accommodation paralysis (cycloplegia) also occur. Isolated paralysis of the muscles of the iris and ciliary body is called internal ophthalmoplegia. 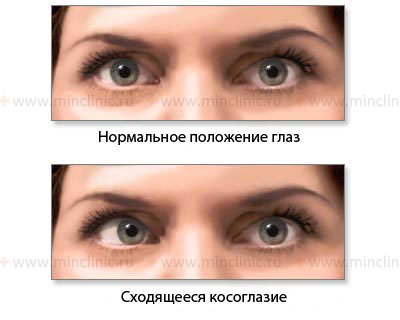 Shows the normal position of the eyeballs and converging strabismus with weakness of the lateral (external) rectus muscle on the right (n. Abducens, VI pair).

Damage to the block (IV) nerve causes paralysis of the superior oblique muscle of the eye. Such damage to the block (IV) nerve leads to a deviation of the eyeball outward and difficulty in movement (paresis) of the gaze downward. Downward gaze paresis is most clearly manifested when the eyes are turned inward. Diplopia (double vision) disappears when the head is tilted to the opposite shoulder, in which there is a compensatory deviation of the intact eyeball inward.

Unilateral damage to the downward paracentral part of the reticular formation of the bridge at the level of the nucleus of the abducens nerve causes persistent gaze paralysis towards the lesion and loss of the oculocephalic reflex. Oculocephalic reflex is a motor reaction of the eyes to irritation of the vestibular apparatus, as in the phenomenon of the doll's head and eyes or caloric stimulation of the walls of the external auditory canal with cold water.

Damage to the rostral interstitial nucleus of the medial longitudinal fascicle in the anterior part of the midbrain and/or damage to the posterior commissure causes supranuclear gaze palsy. To this focal neurological symptom is added the dissociated reaction of the patient's pupils to light:

In some cases, the patient also develops convergence paralysis (movement of the eyes towards each other, in which the gaze will focus on the bridge of the nose). This symptom complex is called Parino syndrome. Parino syndrome occurs in tumors in the pineal gland, in some cases with cerebral infarction (ischemic stroke), multiple sclerosis, and hydrocephalus.

Isolated downward gaze palsy is rare in patients. When this occurs, the most common cause is a blockage (occlusion) of the penetrating midline arteries and bilateral infarctions (ischemic strokes) of the midbrain. Some hereditary extrapyramidal diseases (Huntington's chorea, progressive supranuclear palsy) can cause limitation of eye movement in all directions, especially upward.

Mixed paralysis of gaze and individual muscles of the eyeball

The simultaneous combination of gaze paralysis and paralysis of individual muscles that move the eyeball in a patient is usually a sign of damage to the midbrain or cerebral pons. The defeat of the lower parts of the pons of the brain with the destruction of the nucleus of the abducens nerve located there can lead to paralysis of rapid (saccadic) movements of the eyeballs horizontally and paralysis of the lateral (external) rectus muscle of the eye (abducens nerve, VI) on the affected side.

Unilateral damage to the medial longitudinal bundle caused by a heart attack (ischemic stroke) or demyelination leads to an impaired adduction of the eyeball inward (to the bridge of the nose). This can clinically manifest itself in the form of complete paralysis with the impossibility of retraction of the eyeball inward from the midline, or in the form of moderate paresis, which manifests itself in the form of a decrease in the speed of leading fast (saccadic) eye movements to the bridge of the nose (leading (adduction) delay). On the side opposite to the lesion of the medial longitudinal bundle, as a rule, abduction (abduction) nystagmus is observed: nystagmus that occurs when the eyeballs are abducted outward with a slow phase directed towards the midline, and rapid horizontal saccadic movements. The asymmetric arrangement of the eyeballs relative to the vertical line often develops with unilateral internuclear ophthalmoplegia. On the affected side, the eye will be located higher (hypertropia).

Bilateral internuclear ophthalmoplegia occurs with demyelinating processes, tumors, heart attacks, or arteriovenous malformations. Bilateral internuclear ophthalmoplegia leads to a more complete syndrome of disorders of the movements of the eyeballs, which are manifested by bilateral paresis of the muscles leading the eyeball to the bridge of the nose, dysfunction of vertical movements, tracking purposeful movements and movements caused by the influence of the vestibular system. Impaired gaze along the vertical line, nystagmus up when looking up, and nystagmus down when looking down are noted. Lesions of the medial longitudinal fascicle in the overlying (rostral) parts of the midbrain are accompanied by an impaired convergence (converging movement of the eyes towards each other, towards the bridge of the nose).