The ulnar nerve (n. ulnaris) is a nerve that is mixed in functions (it is also responsible for movement and sensitivity). The ulnar nerve is made up of fibers of the spinal nerves C8 - Th1 - Th2, which pass through the lower trunk first, then the internal bundle of the brachial plexus. 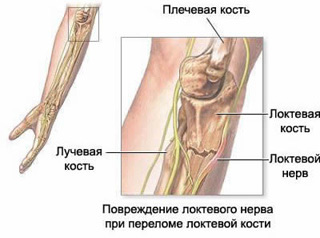 Damage to the ulnar nerve at the site of the fracture of the humerus.

Diagnostics of the ulnar nerve neuropathy

Damage to the ulnar nerve (as a result of surgery, injury, including after injection of the drug, blows and prolonged clamping, bone fractures, and dislocations of the joints) is accompanied by inflammatory changes in it (ulnar nerve neuritis) and manifests itself as an impaired motor and sensory function in the area of its innervation on the hand.

With damage to the spinal nerves C8-Th1-Th2 of the lower trunk and the internal bundle of the brachial plexus, the function of the ulnar nerve suffers equally in combination with damage to the cutaneous internal nerves of the shoulder and forearm and partial dysfunction of the median nerve, its lower leg (weakening of the flexors of the fingers of the thenar muscles), which creates a clinical picture of Dejerine-Klumpke paralysis. 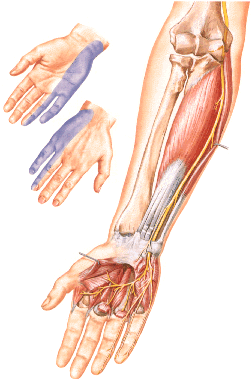 Sensitive fibers of the ulnar nerve innervate the skin of the ulnar edge of the hand, V and partially IV, less often - III fingers. Complete damage to the ulnar nerve causes a weakening of the palmar flexion of the hand, the lack of flexion of the IV and V, part of the III fingers, the impossibility of pinching and spreading the fingers, especially the V and IV, the impossibility of adducting the thumb.

Superficial sensitivity in ulnar neuritis is usually impaired on the skin of the V and ulnar half of the IV fingers and the corresponding ulnar surface of the hand. The musculoskeletal feeling with ulnar neuritis is upset in the little finger. Pain with damage to the ulnar nerve is not uncommon, usually radiating to the little finger. Cyanosis (cyanosis), sweating disorders, and a decrease in skin temperature in the area that roughly coincides with the area of sensitive disorders are possible.

Atrophy of the muscles of the hand with lesions of the ulnar nerve appear distinctly, there are noticeable retractions of the interosseous spaces, especially the first, as well as a sharp flattening of the hypothenar. As a result of damage to the ulnar nerve, the hand takes the form of a "clawed bird paw", when the main phalanges are extended, the middle and terminal ones are flexed, due to which the fingers assume a claw-like position. This is especially pronounced concerning the V and IV fingers. At the same time, the fingers are somewhat divorced, especially the IV and, mainly, the V fingers. 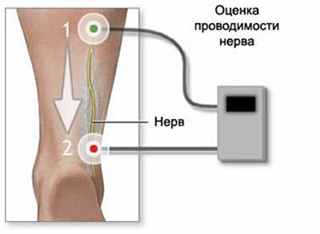 Diagnosis of the level of damage to the ulnar nerve is performed using electroneurography (ENG).

The ulnar nerve gives its first branches only to the forearm, therefore, its damage to the elbow joint and the upper part of the forearm gives the same clinical picture.

The damage of the ulnar nerve in the area of the middle and lower third of the forearm leaves intact innervation of the muscles of the deep flexors of the fingers and the palm, due to which palmar flexion of the hand and flexion of the terminal phalanges of the V and IV fingers do not suffer. But the degree of "claw" of the hand increases. 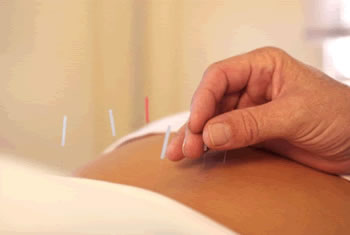 The use of acupuncture is very effective in the treatment of ulnar neuropathy.

To determine movement disorders that occur when the ulnar nerve is damaged (with ulnar nerve neuritis), the following basic tests exist when the hand is squeezed into a fist:

Treatment for ulnar neuritis is selected individually in each case. It includes a set of conservative procedures: 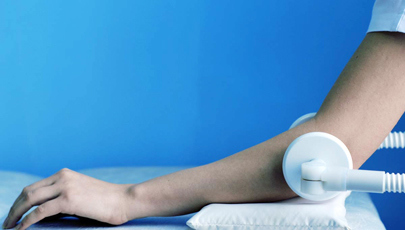 The elimination of paresthesia and pain, the restoration of strength in the muscles in the treatment of ulnar neuropathy is accelerated with the use of physical therapy.