The cause of the lipoma is the atypical fat cells of the subcutaneous adipose tissue laid down from birth. 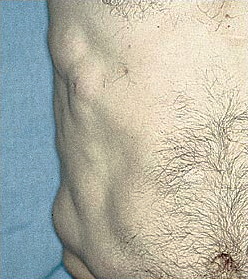 An example of the location of lipomas with lipomatosis under the skin of the abdomen.

The cause of lipoma

The role of diseases of the liver, pancreas, hypofunction of the thyroid gland, and the pituitary gland are also debated among the causes of lipoma and lipomatosis.

Often lipomas and lipomatosis develop due to or against the background of alcoholism, diabetes, malignant tumors of the upper respiratory tract. Familial cases with the autosomal dominant inheritance of subcutaneous lipomas are described.

The lipoma is located where there is adipose tissue, most often under the skin. Favorite places of localization of lipomas under the skin (wen) are the back, upper and lower extremities, scalp (scalp, face).

To the touch, a lipoma under the skin is a soft knot without clear boundaries, painless, not welded to the surrounding tissues. The skin over the lipoma is not changed.

In appearance, atheromas and lipomas under the skin are very similar. Only a doctor can distinguish them by indirect signs. So, lipoma, as a rule, is located in places of accumulation of subcutaneous fatty tissue, and atheroma - in places of the greatest accumulation of sebaceous glands; also, upon close examination, atheroma has traces of the excretory duct - a clogged sebaceous gland. To the touch, these formations are of a similar consistency, but while atheroma is part of the skin, a lipoma is a subcutaneous formation that does not adhere to the surface of the skin. 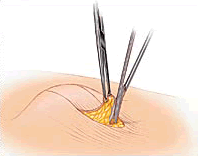 After skin treatment and local anesthesia, an incision is made in the lipoma projection under the skin. 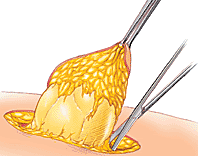 Lipoma (fatty tumor) under the skin is freely removed from the wound.

A skin incision is made over the lipoma, and then the fat accumulation is removed. Then the skin wound is sutured.

Skin healing after lipoma removal surgery occurs within 7-10 days. At the end of this period, the skin sutures are removed. 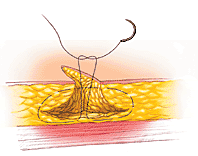 After hemostasis in the lipoma bed, skin sutures are applied under the skin.