The spinal cord is part of the central nervous system. It contains nerve pathways that originate from the nerve nuclei in the brain and its neurons that communicate with peripheral organs and the brain. The spinal cord and nerve roots extending from it are located in the lumen of the spinal canal. It runs from the beginning of the cervical spine and ends in the upper lumbar spine in adults. 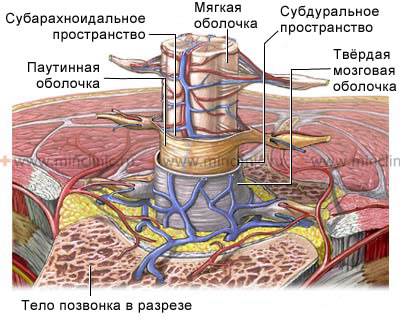 The spinal cord is located in the vertebral canal and is surrounded by epidural fatty tissue.

Some diseases of the spinal cord can lead to irreversible neurological damage in the patient and often to their subsequent disability. Spinal cord injuries with their small dimensions can lead to paralysis of the arms and legs (tetraplegia), or only the legs (paraplegia) with a complete absence or decrease in sensitivity below the injury site. Since the spinal cord is essentially similar in its cross-section to a stranded cable, its small size of the damage is enough for the appearance of permanent neurological symptoms and disability of the patient.

The anatomy of the spinal cord has a segmental structure. The spinal cord provides innervation to the limbs and trunk. 31 pairs of spinal nerves depart from it. This segmental type of structure and innervation facilitates the diagnosis of the patient. During a neurological examination, the localization of the pathological process in the spinal cord can be determined by the border of sensitivity disorders, paralysis or weakness of the muscles of the arms or legs (paraplegia, paraparesis), and other typical syndromes.

In addition to the neurological examination of the patient, magnetic resonance imaging (MRI) or computed tomography (CT) of the spinal cord is performed. The previously widespread method of myelography has now faded into the background in clinical practice due to the emergence of more accurate and safer methods for studying diseases of the spinal cord and spine (MRI and CT). Analysis of cerebrospinal fluid (CSF, cerebrospinal fluid) can provide clarifying data when making a diagnosis for certain diseases of the spinal cord.

Knowledge of the anatomical structure of the spinal cord (segmental principle) and the spinal nerves extending from it allows neuropathologists and neurosurgeons in practice to accurately determine the symptoms and syndromes of damage. During a neurological examination of the patient, going down from top to bottom, they find the upper limit of the onset of a disorder of sensitivity and motor activity of the muscles. It should be remembered that the vertebral bodies do not correspond to the spinal cord segments located below them. The neurological picture of spinal cord injury depends on the damaged segment. 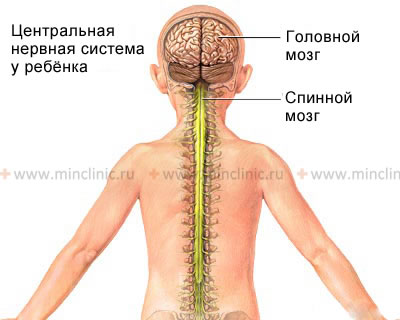 During its formation and development, the spinal cord grows more slowly than the spine. In adults, the spinal cord ends at the level of the body of the first lumbar L1 vertebra. The nerve roots departing from it will go down further to innervate the limbs or pelvic organs.

The clinical rule used in determining the level of damage to the spinal cord and its nerve roots:

With a lesion of the spinal cord at one level or another, the following neurological syndromes will be detected:

Sensory disturbances (hypesthesia, paresthesia, anesthesia) may appear in one or both feet. Sensory disturbance can spread upward, mimicking peripheral polyneuropathy. In the event of a complete or partial interruption of the cortico-spinal and bulbospinal pathways at the same level of the spinal cord, the patient develops paralysis of the muscles of the upper and/or lower extremities (paraplegia or tetraplegia). In this case, symptoms of central paralysis are revealed:

Depending on the level of spinal cord injury, the patient will experience motor and sensory impairments.

During the examination of a patient with spinal cord injury, segmental disorders are usually found:

In the early stages of transverse spinal cord injury in the extremities, there may be a decrease in muscle tone (hypotension) rather than spasticity due to spinal shock in the patient. Spinal shock can last for several weeks. It is sometimes mistaken for an extensive segmental lesion. Later, the patient's tendon and periosteal reflexes become elevated. In transverse lesions, especially those caused by infarction, paralysis is often preceded by short clonic or myoclonic convulsions in the limbs. Another important symptom of transverse spinal cord injury is a dysfunction of the pelvic organs, manifested in the form of retention of urine and feces in the patient.

The nature of possible motor and sensory neurological disorders depends on the extent of the spinal cord injury.

Neurological signs that support the localization of pathological processes inside the spinal cord (intramedullary) include:

A lesion inside the spinal cord (intramedullary), accompanied by the involvement of the most internal fibers of the spinothalamic pathways, but not affecting the outermost fibers that provide the sensitivity of the sacral dermatomes, will manifest itself in the absence of signs of damage. The perception of pain and temperature irritations in the sacral dermatomes (nerve roots S3-S5) will be preserved.

The upper limit of pain and temperature sensitivity disorders in Brown-Séquard syndrome is often determined 1-2 segments below the site of spinal cord injury, since the fibers of the spinothalamic pathway, after the formation of a synapse in the dorsal horn of the spinal cord, pass into the opposite lateral cord, rising up. If there are segmental disorders in the form of radicular pain, muscle atrophy, extinction of tendon reflexes, then they are usually unilateral.

If the focus of the spinal cord lesion is limited to the central part or affects it, then it will mainly damage the neurons of the gray matter and segmental conductors, which produce their intersection at this level. This is observed with contusion during spinal cord injury, syringomyelia, tumors, and vascular lesions in the basin of the anterior spinal artery. With a central lesion of the cervical spinal cord, there are:

Lesions of the cone of the spinal cord, localized in the region of the vertebral body L1 or below, compress the spinal nerves that make up the cauda equina. This causes peripheral (flaccid) asymmetric paraparesis with areflexia. This level of damage to the spinal cord and its nerve roots is accompanied by dysfunction of the pelvic organs (dysfunction of the bladder and intestines). The distribution of sensory disorders on the patient's skin resembles the outline of a saddle, reaches the L2 level, and corresponds to the innervation zones of the roots entering the cauda equina. Achilles and knee reflexes in such patients are reduced or absent. Often, patients notice pain radiating to the perineum or thighs.

With pathological processes in the area of the spinal cord cone, pain is less pronounced than with lesions of the cauda equina, and disorders of the intestinal and bladder functions occur earlier. Achilles reflexes are extinguished in this case. Compression processes can simultaneously capture both the cauda equina and the cone of the spinal cord, which causes a combined syndrome of lesions of peripheral motor neurons with increased reflexes and the appearance of a pathological Babinsky symptom.

With a lesion of the spinal cord at the level of the foramen magnum, patients develop muscle weakness in the shoulder girdle and arm, followed by weakness in the leg and arm on the opposite side. Volumetric processes of this localization sometimes give pain in the neck and back of the head, extending to the head and shoulders. Horner's syndrome is another evidence of a high cervical level (up to the Th1 segment) of the lesion.

Some diseases of the spine can cause sudden myelopathy without prior symptoms (such as a spinal stroke). These include epidural hemorrhage, hematomyelia, spinal cord infarction, prolapse (prolapse, extrusion) of the nucleus pulposus of the intervertebral disc, and subluxation of the vertebrae.

Chronic myelopathies occur with the following diseases of the spine or spinal cord: