An extradural tumor that pushes the spinal cord anteriorly and laterally.

In clinical practice, a neurologist or neurosurgeon is more likely to have extradural spinal cord tumors. Extradural spinal cord tumors are metastases of tumors of organs located near the spine. Metastases from the prostate and mammary glands and lungs, as well as lymphomas and plasmocytic dyscrasias are especially common. The development of metastatic epidural compression of the spinal cord is described in almost all forms of human malignant tumors. The first symptom of epidural (extradural) spinal cord compression is usually a patient's complaint of local back pain. Back pain can increase in the supine position and force the patient to wake up because of it at night. Back pain is often accompanied by radiating root pain, which increases when coughing, sneezing or straining. Often, back pain and local pain on palpation for many weeks precede other symptoms of epidural (extradural) compression of the spinal cord.

Neurological symptoms in a patient with epidural (extradural) compression of the spinal cord usually develop within a few days or weeks. The first manifestation of spinal cord compression syndrome is a progressive weakness in the extremities. Weakness in the extremities can eventually carry all the signs of transverse myelopathy with paraparesis and a level of sensitivity disorders.

An extradural tumor that pushes the spinal cord posteriorly.

With conventional radiography of the spine, you can detect the destruction or compression fracture of the vertebral body at the level corresponding to the spinal cord injury syndrome. Bone scintigraphy is even more informative. Spinal cord compression is most significant when examining the spinal cord on CT, MRI, and myelography (with contrast). The area of horizontal symmetrical expansion and compression of the spinal cord, compressed by an extramedullary pathological formation, is noticeable along the boundaries of the blockade of the subarachnoid space (CSF block). With the cerebrospinal fluid block, the patient also reveals changes from the neighboring vertebrae.

Spinal metastases are formed when a cancerous tumor spreads to the vertebral column with blood flow from the foci of their primary occurrence.

The intradural extramedullary tumor pushes the spinal cord to the side.

In normal adult CSF, there are practically no cellular elements. Their amount in the cerebrospinal fluid in intradural extramedullary tumors of the spinal cord will be small or zero. It should be borne in mind that cytological examination of CSF does not reveal tumor cells. The glucose content in the patient's CSF may also be within the normal range if the tumor is not accompanied by widespread carcinomatous meningitis of the spinal cord membranes.

An intradural intramedullary tumor located in the center of the spinal cord.

Epidural abscess of the spinal cord

With an epidural abscess of the spinal cord in a patient for several days or weeks, it is noted:

Epidural hemorrhages of the spinal cord can develop as a result of:

Patients' complaints of back pain and root pain in spinal cord hemorrhages (hematomyelia) often precede the onset of weakness by several minutes or hours. Weakness and pain can be significantly pronounced, forcing patients to assume ontological positions when moving. Epidural hematoma at the level of the lumbar segments of the spinal cord is accompanied by the loss of knee and Achilles reflexes, whereas in retroperitoneal hematomas, only knee reflexes usually fall out.

Extradural hematoma on MRI of the spine that arose in a patient after an operation to remove a hemangioma.

When diagnosing a spinal hemorrhage in a patient, a volumetric process is determined on myelography. Computed tomography of the spine (CT) sometimes does not detect this hematoma, because the blood clot cannot be distinguished from the adjacent bone tissue.

Spinal cord hematomas can form as a result of spontaneous bleeding. Blood clots can be caused by the same factors as epidural hemorrhages, giving a particularly pronounced pain syndrome in the subdural and subarachnoid spaces. In an epidural hemorrhage, the cerebrospinal fluid (CSF) is usually clear or contains a small number of red blood cells. In subarachnoid hemorrhage, the cerebrospinal fluid is initially bloody, and later acquires a pronounced yellow-brown hue (xanthochromia) due to the presence of blood pigments in it. In addition, pleocytosis and a decrease in glucose concentration can be detected in the cerebrospinal fluid. This creates a false picture, similar to bacterial meningitis.

Intraspinal (intramedullary) hematoma can be caused by spontaneous rupture of an internal vascular malformation, such as telangiectasia in the gray matter. More often, it is the result of an injury. If the bleeding begins in the central area, it usually spreads up and down along the axis of the spinal cord into several segments and is referred to as hematomyelia. Clinically, an acute syndrome develops, which can very much resemble the chronic syndrome characteristic of syringomyelia.

Spinal epidural bleeding is rare. It is usually caused not by trauma, but by a rupture of a vascular malformation, most often a small-vascular hemangioma (AVM, angioma) in the epidural space or near it in the bones of the spine. Radiography reveals vertical trabeculae in the spongy substance of the spine bone, characteristic of angioma. Blood is not always collected in the area of the angioma. A hematoma usually develops over the dorsal part of the mid-thoracic spinal cord. It can cause acute root pain at the level of bleeding. Then the syndrome of transverse myelopathy develops with paresthesias, followed by sensitive prolapses. Motor paresis begins in the fingers and feet and rises to the level of spinal cord compression. In such cases, immediate consultation with a neurosurgeon is indicated.

Destruction of the cervical intervertebral discs (extrusion, herniation) with concomitant osteoarthritis of the intervertebral joints and hypertrophy of the posterior longitudinal and yellow ligament (cervical spondylosis) causes chronic myelopathy at the cervical level of the spinal cord in elderly patients.

On MRI of the cervical spine, a C5-C6 disc herniation compresses the spinal cord at the cervical level and causes compression myelopathy.

Other atypical compression lesions of the spinal cord

In patients with long-term treatment of various diseases with the help of hormones of the adrenal cortex (glucocorticoids) or primary Cushing's syndrome, there is a tendency to increased the growth of epidural adipose tissue. Such an increase in the volume of epidural adipose tissue can compress the patient's thoracic spinal cord. In some blood diseases, compression of the spinal cord is caused by foci of extramedullary hemorrhage.

Rare diseases that lead to compression of the spinal cord in patients include:

Inflammatory diseases of the intervertebral joints manifest themselves in two clinical forms: 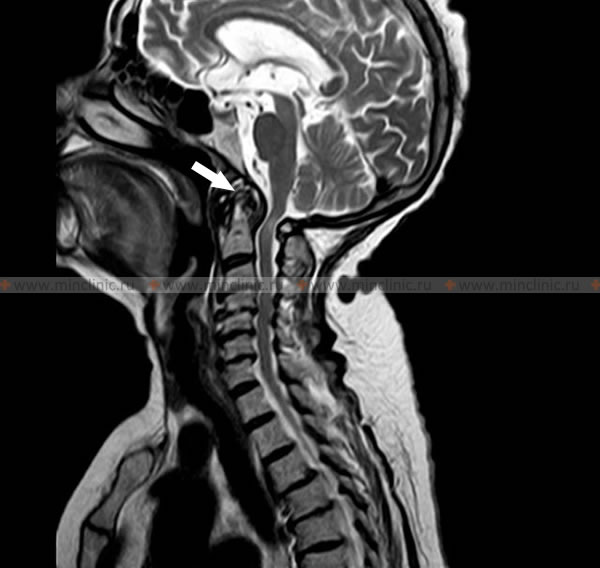 MRI of the cervical spine reveals arthropathy of the atlantoaxial joint and erosive changes in the dentoid process of the C2 vertebra, which cause compression myelopathy in a patient with rheumatoid arthritis.

Complications from joint damage in rheumatoid arthritis that cause effects on the spinal cord are often overlooked by doctors. Anterior subluxation of the bodies of the cervical vertebrae or atlas relative to the second cervical vertebra (C2) can lead to significant damage to the spinal cord up to a fatal outcome in the case of compression after a small injury (whiplash injury of the neck, cervical-occipital syndrome). In a milder case, the patient may develop chronic compression myelopathy, similar to that of cervical spondylosis. The separation of the dentate process from C2 can cause narrowing (stenosis) of the upper part of the spinal canal with compression of the connection of the medulla oblongata and spinal cord, especially in the position of bending the neck with the head tilted forward.